Home AI The two Pixel 6 numbers that could change everything 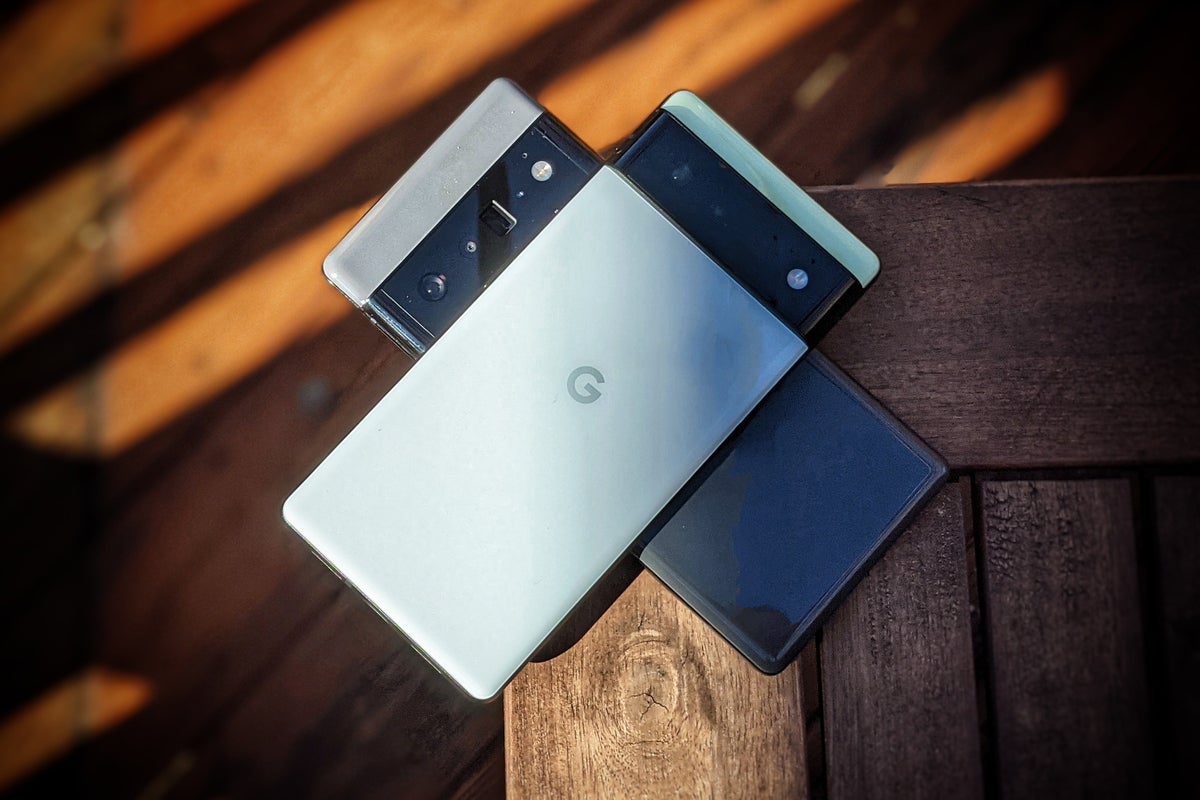 After what’s felt like 47 years of waiting and approximately 994 gazillion unofficial leaks, Google’s Pixel 6 and Pixel 6 Pro phones are out of hiding and on their way into the world.

Well, okay: To be fair, they’ve technically been in the world for a handful of days now — at least, for those of us lucky enough to receive loaner review units for evaluation. I’ve been totin’ the Pixel 6 and its plus-sized sibling around in my dusty ol’ dungarees for nearly a week at this point, and lemme tell ya: Based on these first several days, the devices are every bit as impressive as we’d been hoping they would be.

We’ll save the nitty-gritty of the Pixel-using experience and how the Pixel 6 and Pixel 6 Pro differ, specifically, for another day. (Hint: The comparison isn’t as simple and straightforward as you might expect.) Today, I want to talk a bit about the most consequential Pixel 6 revelations of all — actually, two of ’em.

And fair warning: My logic around this might come as a surprise.

We’ll start with the most obviously prominent Pixel number, and that’s the price: The Pixel 6 is selling for an almost shockingly low $600 in the U.S., in its lowest storage configuration, while the Pixel 6 Pro will run $900 in its base-model option. (The prices do go up from there, but only as a result of increased local storage capacity.) That, if you’ll pardon my French, is gosh-darned cuckoo. For context, Samsung’s current top-of-the-line standard Android flagship, the Galaxy S21, starts at $800 in its smallest available model and goes up to $1,200 for the most premium, plus-sized version — the one that’s most comparable to the Pixel 6 Pro.

Just on price alone, the Pixel 6 and 6 Pro have the potential to be a total shapeshifter for the state of Android and expectations around the ecosystem. But the price is only half the story. There’s another number that’s every bit as important, and it’s a number most tech-pondering organisms tend to overlook.

That number is the length of software support the new Pixel 6 phones will receive. These are the first phones to feature a custom Google-made chip under their hoods, after all, and expectations have been high that the processor’s presence would lead to new lengths of support we Android-preferrin’ people-folk have yet to encounter.

And it has — sort of. Google says it’ll support the Pixel 6 and Pixel 6 Pro with five entire years of timely and reliable monthly security patches, which is certainly significant. That’s a full two years more than the current platform standard and what most Android phones (if they’re lucky) receive.

As for the actual operating system updates, though — which, believe you me, absolutely do matter beyond their surface-level value — Google says it’s sticking with the same three-year promise it’s had in place for Pixels over the past several years. (Technically, the OS update support window is “at least three years,” as Google explained to me ahead of this week’s event. But when making an assessment of a device’s value, we have to go by what’s actually guaranteed, not what’s maybe-sorta-potentially possible.)

So, yeah: For anyone who’s been paying close attention lately, that may be a bit of a bummer. Recent rumors had suggested the new Pixels would receive four years of Android OS updates, which would’ve been truly incredible and a more explicit-seeming fulfilment of the Pixel processor’s potential. That was certainly my first reaction upon hearing the news.

But then I started thinking about it more deeply, and I realized that snap assessment is actually missing the bigger picture.

Let’s get the easy questions out of the way first: Could Google have bumped the Pixel 6’s support window up to four years of OS update support to go along with the phone’s five years of security patches? Absolutely. Is there anything stopping Google from doing that now that it’s in control of both the hardware and the software, inside and out? Almost certainly not. Would I have rather had that happen? You’d better believe it, bucko.

And here’s another one for ya: Was I initially moved to write this column about how Google missed a major opportunity by not extending the OS update support time with the Pixel 6? Yes — yes, I was. I even had a pithy headline in mind and was bracing myself for the inevitable backlash that comes when someone who frequently writes positive things about a particular brand or type of technology dares to (gasp!) say something critical.

But then — well, I got to thinking about that first number that stands out in the Pixel 6’s presence. Y’know, the price. And something dawned on me: Initially, we all expected these phones to be $1,000 or more, given their premium positioning and nearly compromise-free nature. Then we heard they’d more likely be in the neighborhood of $750 for the smaller model and $1,000 for the Pixel 6 Pro, and that seemed like a phenomenal value for what the phones had to offer.

And you know what comes next: It turns out those figures are even lower, at least here in the States — again, $600 for the regular Pixel 6 and $900 for the Pixel 6 Pro. That, my Android-adoring amigo, is absolutely insane.

For context, consider: Last year’s Pixel 5 cost $700 in the U.S., and that was considered a value play — a deliberate move away from the Pixel’s previous premium positioning in order to achieve a more affordable, almost Nexus-reminiscent price. The Pixel 5 cut corners and eliminated some of the higher-end niceties of Pixels past in order to achieve that price. It was still an exceptional phone, mind you, and it definitely delivered on the areas that mattered the most. But it wasn’t exactly a premium, top-of-the-line device, and that was very much by design.

Well, lemme tell ya: Having carried both the Pixel 6 and Pixel 6 Pro around for nearly a week, neither of ’em is a corner-cutting phone. They are both premium, flagship-caliber devices through and through. And their starting price is a hundred bucks less than what Google charged for the Pixel 5.

So when you look at the software support period and the overall value through that lens, suddenly, things take on a very different coloring.

The Pixel 6 and smartphone math numbers

One number-oriented notion I like to think about is the concept of smartphone math. Put simply, an Android phone is only fully advisable to use when it’s actively receiving both regular operating system updates and regular security updates. Anyone who studies Android and understands how the platform works will tell you the same thing. Using an out-of-date phone may not be the end of the world, realistically speaking — especially given how wildly unlikely you are to encounter most major security threats in the real world — but it’s certainly not optimal, particularly if you use your phone for work-related purposes. In addition to their more front-facing elements, Android OS updates almost always contain critical enhancements in areas like privacy, security, and performance, so using a device that isn’t up to date can put you at a serious disadvantage.

With that in mind, what makes sense is to think about a phone in terms of its relative value for the amount of time it’ll remain viable and fully advisable to use. That lets you understand how much you’re actually paying per year that you own the phone and what kind of experience you’re getting in exchange for that cost.

So with the regular Pixel 6 costing $600 in its 128GB form and receiving three years of operating system updates, the phone ultimately ends up costing you $200 per year in that three-year period of fully advisable use. Realistically, you could hang onto the phone for a fourth year, too, since Android OS updates typically come out only once a year these days (and since you’ll still be getting active security updates during that fourth year). If you did that, you’d end up paying just $150 per year over that four-year period when the Pixel 6 will be completely up to date and current.

Let’s compare that to some other noteworthy phones of the moment, for perspective:

To take that a step further, yes: You’d actually end up paying less per year of advisable ownership with the $800 Pixel 6 than you would with the $450 Pixel 5a if you were to hold onto the Pixel 6 for its entire four-year-max fully supported lifespan. How crazy is that?!

And none of that is even taking into account that fifth year of security patches, which gives you a bit of a buffer in case you end up needing to hang onto the phone a little longer or maybe just want to keep using it for other purposes after replacing it. Security patches without OS updates aren’t entirely ideal, but they’re a heck of a lot better than nothing — especially when you also factor all of the other ongoing updates Android devices receive to system-like elements via the Play Store.

Pixel 6 and the bigger Android picture

Putting this all together, Pixel phones were already in a league of their own when it comes to user experience, support, privacy, and security. Now all of that is combined with a level of value that almost seems unthinkable in comparison to the current Android standard.

So, once more: Would it have been nice if Google had offered four years of OS updates to the Pixel 6 devices in addition to its elevated security patch support? Obviously, yes. But that kind of extended support requires resources, and resources come at a cost — to Google. And instead of building that cost into the Pixel 6, the company opted to give us a startlingly low price.

To put that in perspective: If the Pixel 6 had cost $1,000, as previously expected, and had a full four years of OS update support, that would’ve made the phone effectively cost $200 a year for its maximum advisable lifespan (five years, counting that extra year of security patches). And let’s be honest: Lots of people who buy Pixel phones aren’t gonna hang onto their phones for a full five years, anyway, so that theoretical value may not have ultimately ended up mattering — especially when it stretches out that long.

With a $600 price tag and three years of OS update support, that’s an even lower per-year effective price for the phone’s maximum advisable lifespan, if you follow the same pattern and go with the four-year approach. And after those four years are up, you can buy another Pixel phone and be in the exact same place you would’ve been in terms of cost and value — only you’ll be moving into a newer, better phone even sooner.

It’s tempting to frame the Pixel 6’s three-year OS update promise as a failure — as Google missing the opportunity to raise the standard and bring a whole new level of value to the Android device domain. But the truth is that Google did raise that standard. It did completely change the Android value equation. It just adjusted the price part of that equation instead of adjusting the support window side of it. That creates an incredibly compelling new purchasing option within the realm of Android, for sure, but it also might eventually force other Android device-makers to either bring their own prices down or bring their support periods up even higher if they want to stay competitive.

For most people and purposes — especially those of us who replace our phones every two to three years, anyway — that might actually be the most optimal result imaginable.

KubeCon Europe roundup: Key developments for Kubernetes on the edge