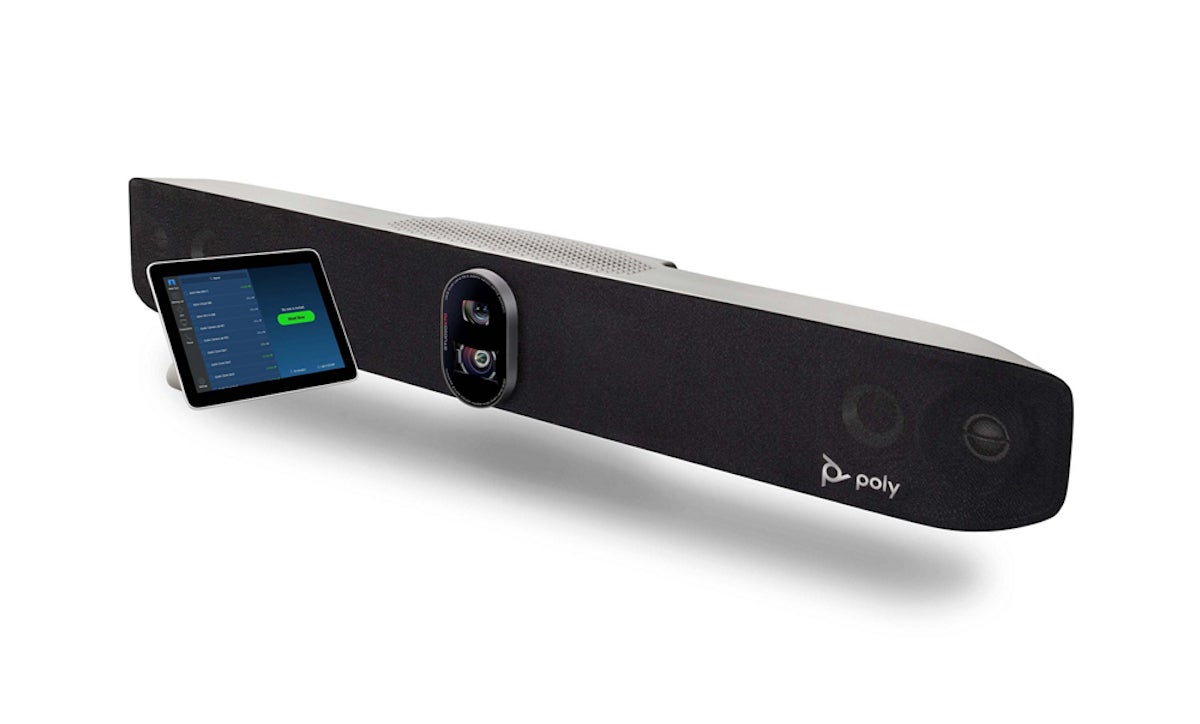 I got a briefing this week on the impressive Poly E70 conference room camera and X70 (with built-in speakers). They are impressive pieces of hardware, but they only work with Zoom at the moment (though Teams certification is coming). And that lack of interoperability between conferencing platforms continues to make every device in this class a far riskier buy than they should be.

In the context of this Poly announcement, let’s explore why conferencing services providers don’t understand what networking and telecom companies figured out more than three decades ago. In short: this stuff has to be able to interoperate.

The Poly Studio E70 and X70 in detail

The E70, which sells for around $3,500, and the X70, which goes for around $6,000, were separated at birth; the E70 is a standalone version of the X70. (The camera seems to borrow from smartphones that have gone to multiple cameras to handle different conference room needs and sizes.) Both units have twin cameras — one wide-angle and one focused — with digital pan-and-zoom and the ability to track a speaker in a room. The hardware can automatically shift between wide-angle and narrow depending on the number of speakers in a room.

The camera demo showcased decent 4K resolution, nice transitions (fade in and out) between modes, and a pan-and-zoom that seemed impressively fast. These are designed for mid-sized to large conference rooms, mainly those laid out in a rectangle with the room’s length behind the camera.

I’m not a fan of the off-white E70 because most conference room monitors are black, and it will contrast with the monitor. The X70’s industrial design should work better because it’s more of a black/gray. If your wall is white, the E70 will likely fade into the background; against a colored wall, it’s going to pop — and not in an attractive fashion. (Most of the cameras I test are black or gray, and they seem to work better in modern offices.)

Ideally, as a platform-independent vendor, Poly should be at an advantage because it’s in the company’s interest to work across all platforms. Sadly, it can’t.

The problem of vendor lock-in

As noted, there is a significant issue with this and every other offering in this space: none of these can switch between platforms on the fly. Companies tend to rely on more than one conference room option; more often than not, that’s Microsoft Teams (disclosure: Microsoft is a client) and Zoom for large meetings.  Though the Poly hardware only works with Zoom, once certified, it can be reconfigured to work with Teams. (At this point, forget Webex or any other conference room solution.)

This problem isn’t Poly’s fault; the vendors don’t seem to get the market’s current open source and interoperability trends, nor do they understand that communications devices need to work with each other. Apple phones can call Samsung phones, for instance, without mode switching. While companies can default to a provider, it is unlikely they can dictate what their customers, investors, or suppliers will use.

The workaround is to connect the camera to a PC because a PC can switch between providers; however, even a PC can’t connect a stream from one provider like Zoom to another like Microsoft Teams.  Ideally, as with phones, you should have a phone number for any connected conference room.  In addition, regardless of the hardware you have, you should be able to call that number and conference in as many locations as you can manage — just as you would on your phone.

Right now, the videoconferencing market is being sustained by the corporate response to the ongoing Covid-19 pandemic. It forces most meetings to be remote, but should people ever get back to the office, this segment is again likely to shrink due to the lack of interoperability. This is nuts. It lowers the effectiveness and value of these solutions by making the connection between customers, investors, partners, and vendors far more complicated than it should be — and restricting collaboration between companies and government agencies on different platforms.

A primary carrier like AT&T or a major vendor like Microsoft could step into this segment and own it simply by creating a hardware-agnostic back-end and rolling out a penetration pricing strategy. And we are just waiting for a major government, like the US government, to set a standard that assures interoperability. That would wipe out the marginal players right now.

Until the interoperability problem is solved, I can’t recommend any conference room solution that isn’t PC-based because, at least a PC will work with and switch between the majority of providers.

How My Students Are Using Google Sheets With Their Arduino Projects

Serious flaws found in multiple smart home hubs: Is your device among them?

How Peloton’s ad got made (a short play)