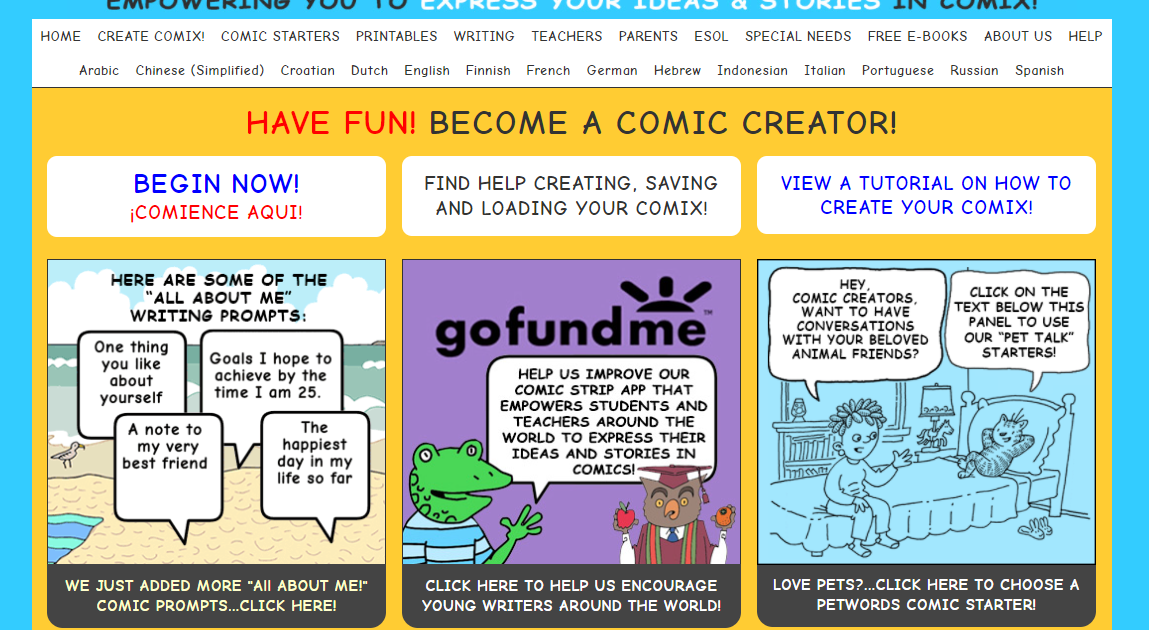 Disclosure: Make Beliefs Comix is a new advertiser on this site.

Creating comics is one of my favorite creativity exercises.When I was a kid I loved flipping through books of Peanuts comics. Unfortunately, I could never draw as well as Charles Schultz. Today, thanks to tools like Make Beliefs Comix, you don’t have to be good at drawing in order to create comics.

In the classroom and in my personal life I’ve always felt that creating a comic is a fun way to illustrate a story and or make a statement. To that end, here are five ways to think about using comics in your classroom this fall.

Express Emotions and Tell Personal Stories
Adults don’t always have the right words to express what they’re feeling and kids definitely don’t have all of the right words. That’s why for years I’ve recommended having kids create comics to express their feelings and tell their stories. Make Beliefs Comix in particular is an excellent platform for students to use to create their own comics to tell their stories. In fact, the founder of Make Beliefs Comix had that in mind when he started creating these comic story starters and this daily comic diary template.


Practice a New Language
For the new school year Make Beliefs Comix is launching a new feature that enables students and teachers to make audio recordings. (That feature will be available soon). Combined with support for writing in fourteen languages, the audio recording component of Make Beliefs Comix makes a great tool for students to practice writing and speaking in a new language.

Create Historical Fiction
When I taught U.S. History I tried to get my students to think about what life was like for ordinary people during the periods they were studying. Creating historical fiction stories is one way that I attempted to get my students to think about and write about what life was like for people living in the time periods we were studying. For example, I would ask them to think about what daily life was like for the family of an immigrant factory worker during the industrial revolution. One year, after I gave that prompt, a student asked me if he could draw characters for his story. I agreed and it turned out to be my inspiration for future classes to create historical fiction comics.

Tools like Make Beliefs Comix make it possible for anyone to create a comic even if they’re not adept at drawing. Simply pick some characters, a background scene, and speech bubbles from the design menu and then write a story.

Teach Empathy
Make Beliefs Comix has an entire section dedicated to SEL (Social Emotional Learning). In that section you will find prompts for creating comics in which students express how they’re feeling and how they feel about what they’re seeing in the world. Additionally, you can have students go beyond making simple comics and complete ebook templates offered by Make Beliefs Comix. Those ebook templates, some of which I’ve featured in the past, are full of prompts for writing about courage, dreams, and joy.

Model Behaviors
As the new school year begins, consider creating your own little comics to illustrate the behaviors that you want students to practice in your classroom. Print them out and place them in your classroom. These could be comics about lab safety procedures, how to behave in the lunchroom, or what to do when they hear someone being mean to another student.

Watch this short video (embedded below) to get started making your own comics with Make Beliefs Comix.

INTERPOL aims to deal a blow to digital piracy