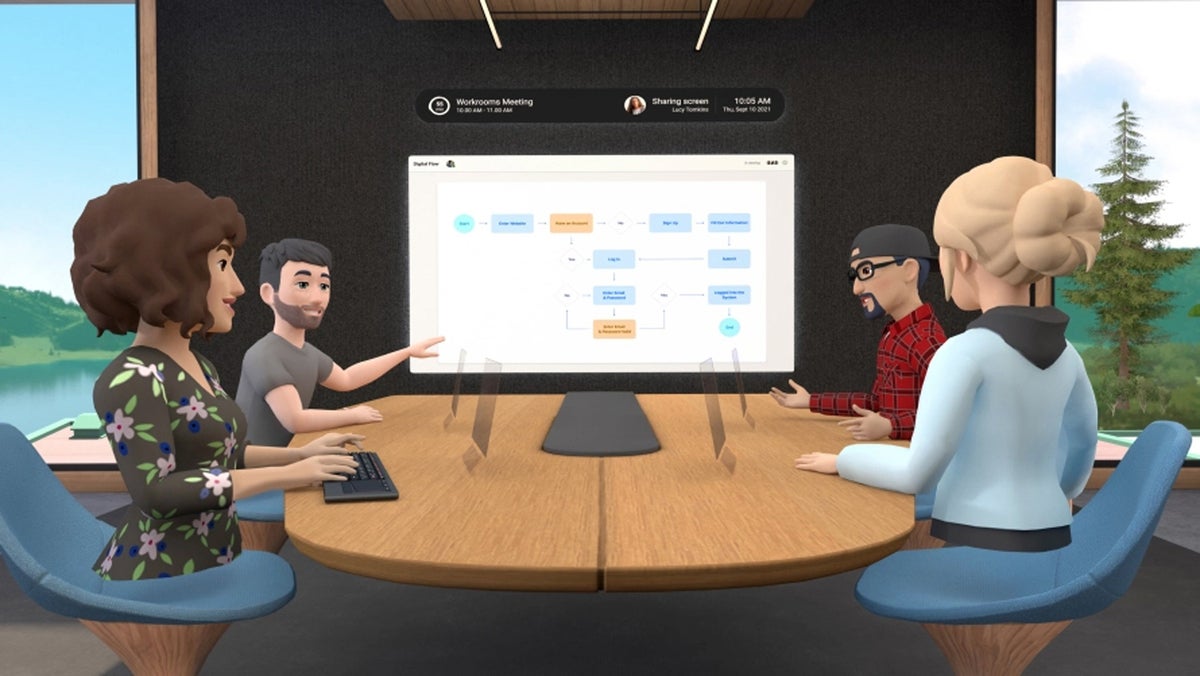 Facebook on Thursday unveiled its vision to make remote meetings more immersive with the introduction of Horizon Workrooms, a virtual reality app for team collaboration. But convincing employees to put on VR headsets for conference meetings — or companies to buy the hardware in the first place — could be a tough sell, say analysts.

According to a Facebook blog post, Horizon Workrooms can improve team communication and collaboration, “whether that’s getting together to brainstorm or whiteboard an idea, work on a document, hear updates from your team, hang out and socialize, or simply have better conversations that flow more naturally.”

Users meet in a virtual environment, where they can talk with up to 15 other colleagues in VR and present ideas on a shared whiteboard or view shared files. The virtual meeting rooms are intended to be accessed using Oculus Quest 2 headsets, though it’s possible to join by video call from a laptop — the app supports up to 50 co-workers dialing in with video.

Other features include mixed reality keyboards that allow users to access their laptop while in a virtual space, hand-tracking for more expressive avatar animations, and a spatial audio system that adjusts the way people sound to others based on their relative locations in the virtual room.

Facebook is not the only tech company to target VR-based collaboration. Spatial’s app has enabled virtual meetings with 3D avatars for several years, while Microsoft’s Mesh app for HoloLens, announced earlier this year, has a similar aim.

Adoption of such technologies has yet to hit mainstream acceptance in the workplace, however, and faces several hurdles, such as fatigue from wearing bulky headsets and the business cost of deploying devices to employees. (Oculus Quest 2 devices cost around $300.)

Outside of niche applications such as complex training or engineering review scenarios, buyer-side interest in VR for remote collaboration remains at a low level, according to research from analyst firm Metrigy.

“I don’t see VR being used to replace the average videoconference any time soon due to the cost, bandwidth, complexity, and lack of desire by most folks to immerse themselves into virtual reality experiences,” said Irwin Lazar, Metrigy’s president and principal analyst.

“They also don’t yet allow for easy sharing of content,” he said. “My guess is that they will find some level of adoption for virtual events before they do so for meetings.”

Adoption tends towards vertical-specific use, he said, with manufacturing and healthcare sectors the primary early adopters. Common use cases within these industries include product design, training, and remote support, as well as collaborative meetings.

“I expect that adoption for Horizon Workrooms will follow these trends initially and could expand to cover broader, horizontal cases as well as use cases in other verticals such as retail, field work, and technical support,” said Castanon.

Horizon Workrooms is available in open beta for free to Oculus Quest 2 owners.

Microsoft doubles down on the telco cloud with Metaswitch acquisition – Telecoms.com

Deluded Scousers burn down 5G masts because COVID-19 is talking through the airwaves –...

Spotify opens up on choosing Google Cloud for its cloud migration