Home AI The 3 words that could spell trouble for Android apps on Windows... 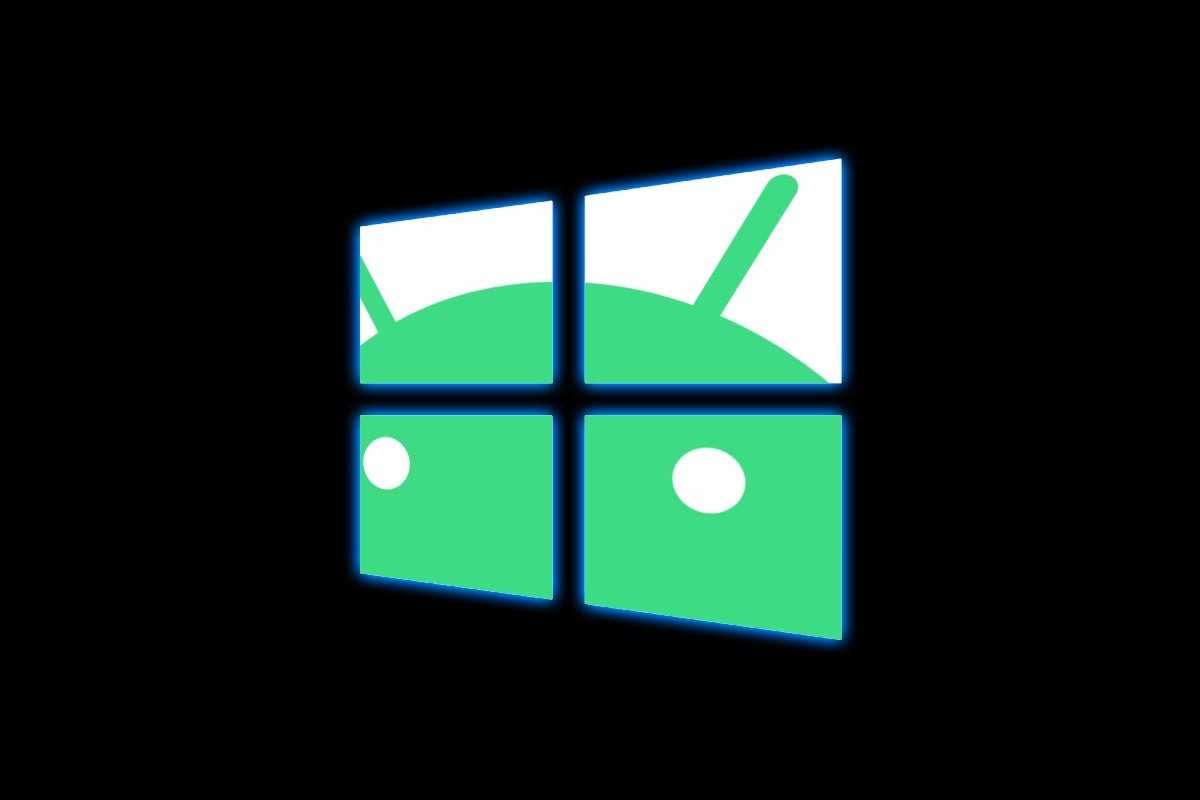 Holy hell freezing over, Batman! Worlds are colliding and wild things are happening here in the land o’ Googley tech, but before you get your knickers in a knot with excitement, there’s a quick reality check we need to consider.

Let me back up a second, for anyone who isn’t magically inside my brain and aware of what I’m thinking. Microsoft caught us all by surprise last week when it revealed that the upcoming Windows 11 operating system would support — drumroll, please — Android apps. Yes, Android apps on Windows. Who woulda thunk?

All right, so technically, we’d heard about this possibility before — way back in December of 2020 (which I’m pretty sure was at least 140 years ago). But still, it was a mere hypothetical at that point. And despite all the drippy leaks puddling up around the new Windows announcement, no one seemed to sense that this platform-defying, mind-blowing move might actually happen right now.

But oh, it be happenin’, all right. When Windows 11 ships later this year, its new and improved Microsoft Store will feature a section of Android apps — sittin’ pretty and waiting to be installed, right alongside the regular Word, Excel, and even Minecraft EXE files.

Now, what you might notice in that image leads us to the big honkin’ asterisk with all of this: The Android apps on Windows 11 aren’t coming from Google, exactly — not from the Play Store app market you’re accustomed to interacting with on your actual Android device. Instead, they’ll rely upon Amazon’s Appstore, a.k.a. The Place You Go for Android Apps Only If You Have Absolutely No Other Option Available™ (the unofficial tagline of the Amazon storefront).

Amazon’s Appstore presents plenty of practical problems — chief among them the fact that its virtual shelves are relatively barren compared to the actual Play Store, particularly when it comes to popular productivity tools. You won’t find any Google-made apps there, of course, but beyond that, you also won’t find big-name business appliances like Slack, Trello, or Asana. You won’t find password management services like LastPass, 1Password, and Bitwarden. You certainly won’t find most of the efficiency-boosting power tools we talk about so often in these quarters — not even the relatively basic and mainstream ones like IFTTT and Hue.

Heck, even Microsoft’s own apps are relatively scarce in the Amazon app market. Core titles such as Outlook, OneNote, and the all-in-one Office combo are present, but other offerings — including the standalone Word, Excel, and PowerPoint programs as well as Microsoft Authenticator, Microsoft To-Do, and Microsoft SharePoint — are nowhere to be found.

Worse yet, the now-Amazon-owned Eero system for enhanced internet access (hello, home office!) isn’t even available in the Amazon Appstore setup. Bank of America? Nope. American Express? Not present. Chase Mobile? Missing in action. Bueller? Bueller? The list goes on and on.

And across the board, the apps that are present in the Amazon Appstore are often as good as abandoned. Lots of titles are numerous versions behind their up-to-date Play Store counterparts, and plenty of programs you encounter in the Amazon environment clearly haven’t been touched in years.

All of that gets at the underlying issue with this arrangement — and brings us to the three words that may doom this entire Android-apps-on-Windows enterprise: Google Play Services. The Amazon Appstore, y’see, isn’t an apples-to-apples equivalent of the Google Play Store. It’s lacking key parts of the Android experience that are available exclusively on devices running Google’s Android setup. And chief among those pieces is a hefty little helper called Google Play Services.

Google Play Services isn’t exactly a household name — at least, not among the non-developers and non-total-nerds among us. But as a proud total nerd, let me fill you in on what this practically invisible layer of Android does, in as simple and human-sounding terms as possible.

So here it is: Google Play Services performs a bunch of important behind-the-scenes magic that lets apps work the way they need to work. It allows apps to interact with your location, for instance, as well as optimize their use of on-device resources, handle in-app purchases, empower you to lean on the Google Cast system to send content to TVs and other screens, and be able to receive automatic updates for fast fixes and improvements.

Most critical of all, though, Google Play Services allows an app to send you push notifications — y’know, the alerts about important events (emails, messages, reminders, and so on) that are a vital part of so many productivity apps’ purposes.

And because Google Play Services is such an integral piece of the standard Android puzzle, app developers can’t simply take the same apps they publish on the Play Store and plop ’em down into the Amazon storefront. They’ll have to either find alternative ways to offer similar functions with different protocols (some of which Amazon has created and provides as part of its setup) or reduce their app’s functionality in order to allow it to operate in that Play-Services-free environment.

And if they don’t do one of those two things, what would happen? It’s simple, Shirley: Their app would break. It wouldn’t work properly in the Play-Services-lacking Windows arrangement. Certain functions would either fail to operate entirely or would give you funky errors when they’re activated. No bueno.

And that, m’dear, brings us back to the root of this discussion and why those three words — Google Play Services — are such a huge problem for Microsoft’s Android-apps-on-Windows ambitions. The absence of Google Play Services means that any apps brought into Windows are effectively operating on a completely different platform, despite the fact that they’re technically still Android apps. And that, in turn, means the developers behind ’em have to take on the task of updating, testing, and supporting their apps to make sure they run smoothly in that setting.

Make no mistake about it: That’s no small feat. And it’s almost certainly why Amazon’s Appstore, despite being a full decade old now and being the single default storefront on Amazon’s very popular Kindle and Fire devices, is a bleak wasteland of missing titles and short-lived attempts at cross-platform compatibility.

The logic here is really quite simple: Embracing a whole other platform is a major investment for any developer, and unless it measurably pays back in terms of added adoption and income, it’s a difficult task to justify. And that’s to say nothing of the dumbed-down, potentially inferior user experience the developer may have to settle on for its customers as part of that Play-Services-lacking arrangement.

As independent Android developer Bardi Golriz — the guy behind the acclaimed Android titles Appy Weather and Ruff Notes — put it on Twitter: “[It] would be a no-brainer if it just worked and didn’t involve maintaining another platform version. There’s a reason I’ve not published any app to the Amazon Appstore.”

The million-dollar question, as Golriz went on to point out, is the value being offered to developers in exchange for their added efforts. And that value is only present if people are actually using the storefront and making purchases through it — something he hasn’t typically experienced with his attempts at publishing to the Microsoft Store in general.

For an even more real-world-level view of what life can be like using Android apps without Google Play Services in place, we can look at Huawei’s recent attempts to ship Android phones without any form of Google elements involved. Most reviewers reached similar conclusions — like this one, from The Verge:

Not every app will work properly even if you’re able to install it. … [and] it’s not just the apps themselves, but often the cloud services that power them. For example, Uber uses [Google services] to determine your location and for its mapping data. Some other apps, like The Guardian, work more or less normally but pop up an error message on boot saying Google Play Services are required.

All in all, Android apps on Windows represent a dramatically different situation than Android apps on Chrome OS — where (a) the programs operate with full Google Play Store and Play Services support, and (b) the apps play the important role of gap-filling limitation-eliminators within the Chromebook environment. The very value of their presence on Windows is far more limited, even if they were to work properly.

But once you take out the Google-made titles and add in all the limitations of the Amazon Appstore arrangement, Microsoft’s facing a major uphill battle to get this effort to amount to anything beyond a mere novelty. (And yes, it’ll technically be possible for folks to bypass the Amazon Appstore entirely and sideload Android apps on their own within Windows — and thus, in theory, to eventually even bring Google elements unofficially into the environment. But, well, that’s violating usage rights, venturing into extremely technical and likely quite rocky enthusiast-level waters, and anything but a common use-case, especially when it comes to business purposes.)

There is, of course, the best-case-scenario outcome with this — wherein developers flock to the Amazon Appstore, invest the time in working around its limitations, and finally start taking it seriously as a result of the new opportunity this Windows integration presents. And who knows? Maybe that’ll happen. It’d sure be a huge positive for the Android ecosystem as a whole, if so.

With those three consequential words in the equation, though, it’s tough to remain anything but skeptical over what this move will actually represent — even if the notion of being able to run Windows apps on Chrome OS and Android apps on Windows is the most delightfully trippy, line-blurring twist a tech-lovin’ geek could possibly ponder.

Why Threat Intelligence Gathering Can Be a Legal …

For tech to serve the public good, we need standards