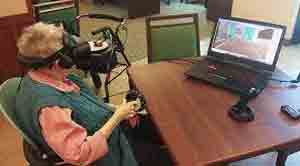 The quick decision-making and action required to play certain games that demand physical engagement can help seniors improve their balance, coordination, and reflexes.

FREMONT, CA: When one thinks of a ‘gamer,’ they probably will not think of a 60-year-old woman spending her afternoon on a video game. However, consider this: an estimated 21 percent of people who play video games are over the age of 50. Furthermore, it has been shown that some of those older ‘gamers’ are reaping major health benefits as a result of their activities. Here are a few of the social, cognitive, and physical advantages that video games and Virtual Reality (VR) can provide seniors.

Going for a stroll, having lunch with friends, or attending a movie are all good ways to improve your emotional health. As a result, it is no surprise that many seniors who enjoy playing video games are happier. According to a study involving 140 seniors aged 63 and over, both regular and occasional video gamers reported higher levels of happiness, social functioning, and health than non-gamers. Furthermore, they discovered that persons who play video games have considerably lower rates of depression than those who do not.

Video games can also be beneficial to one’s health, especially for the elderly. The quick decision-making and action required to play certain games that demand physical engagement can help seniors improve their balance, coordination, and reflexes. As a result of playing video games, some seniors have reported quicker walking speeds. It may not appear so at first, but bettering cognitive skills can lead to better balance and gait. At the same time, fitness video games have changed how the elderly exercise, VR is already changing how the physical treatment is done. New programs as easy as walking around a landscape projected on a television screen have yielded impressive results.

Video games can aid not only emotional and physical growth but also cognitive development. A study found that seniors who played 3D video games exhibited considerable improvements in cognitive function, effectively reversing signs of aging. Video games challenge a gamer’s memory, particularly short-term memory. Even a few minutes of video gameplay can help seniors remember names, addresses, phone numbers, dates, and times better than they would without it. Furthermore, VR has proven to be a great tool for relaxation, dementia prevention, and social interaction. It has also made exercise more enjoyable for seniors who want motivation.

A Timeline for Transitioning to the “New” Version of Google Sites