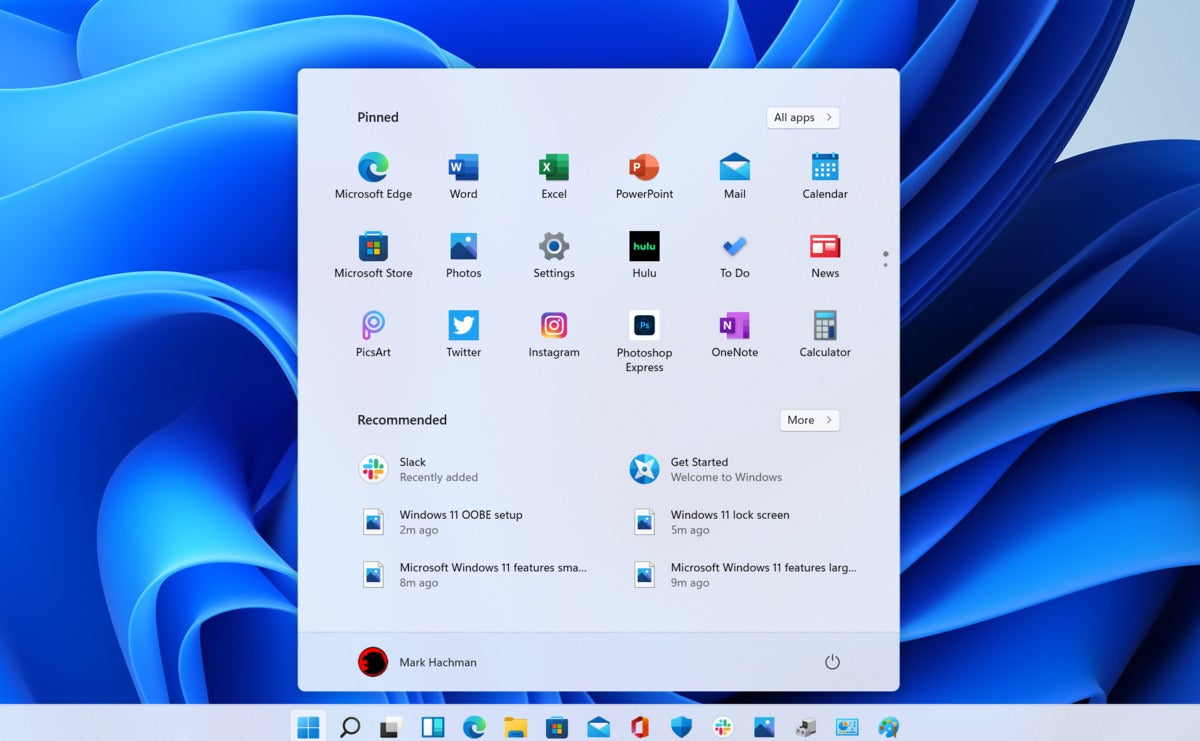 Disclosure: Microsoft and Dell are clients of the author.

Windows 11 is in early preview right now, and it is far from feature complete; this phase of the deployment is typically focused on assuring hardware and application compatibility. Most of my newest desktop machines won’t yet run Windows 11 because they weren’t configured with their 2.0 Trusted Platform Modules (TPMs) turned on (an easy fix) or with Secure Boot enabled (a much more complicated fix).

I was, however, able to load the Windows 11 preview onto my Dell OptiPlex 7070 Ultra modular desktop successfully and without issues. If you decide to try out Windows 11, I suggest you load it overnight, as the upgrade takes several hours.

Here are my initial impressions.

Windows 11’s taskbar looks like an updated blend of the Windows 10 taskbar and the macOS dock without the animations. It moves the icons to the center of the taskbar rather than the left, justifying them.

Opening up the index of applications is similar in practice, but the result is very different and much closer to what you would see on a smartphone: the apps you most use are presented in an alphabetized grid and not a list as in earlier versions of Windows. This change made it far faster for me to find specific applications than had been the case earlier.

Switching to the complete app list is quick and easy, but it is an extra step from the default app list we had before. As with the default app list, the overall effect is closer to what we are used to on a smartphone. Once you get used to this new layout, it does feel more efficient.

Settings do not immediately pop up when you hit the Windows icon, which is still on the left but now centered with the other app icons in the taskbar. The icons on my home screen and my background were unchanged. Once you open Settings, however, the layout is significantly different, and it may initially take you a while to find where the setting you want has moved.

That said, the settings I look to most often, like software updates, were in view and not buried under a submenu, reducing my time to access them. As with the app lists, once you get used to the new Settings layout, you’re likely to find it more efficient to use.

Microsoft’s smartphone integration app, Your Phone, is working on this initial build, and it does a decent job of providing an onscreen view of some of your phone’s core features like texts and phone calls. It appears that it has a music feature as well, but currently that appears to be disabled. I did appreciate that you could drag a photo from the visible representation of your phone and into email from your PC desktop interface. The app is both easier to use and more useful than the last time I used it.

During this phase of the rollout, the platform typically isn’t optimized yet for performance. Still, I didn’t notice any individual wait states or performance degradation on the Dell PC. This lack of noticeable performance penalty suggests there may be a slight performance boost when we get closer to the product’s official release.

While there were minor improvements, there was nothing about Windows 11 that knocked my socks off at this time. But that is expected at this early phase, which is primarily focused on hardware/software compatibility and is not yet feature complete. This phase of the testing isn’t supposed to be exciting; it’s just supposed to work, and Windows 11 did work with minimal disruption or retraining.

The updated OS went in clean with no errors, my core apps all worked fine, and the Your Phone app showed a usability improvement, even though at least one of the newer features didn’t appear to be active yet. I’ll provide updates as the product becomes more feature complete, but, for now, I don’t see any significant problems beyond the known need for a current TPM and Secure Boot.

Anyone using a business PC, laptop, or desktop that’s within three years old, configured with TPM 2.0, and with Secure Boot enabled should have a similar Windows 11 experience to mine. Windows 11 may not install on many consumer or education-focused PCs if they don’t at least have a current TPM.

The TPM 2.0 and Secure Boot requirements for Windows 11 should result in far more PCs that are secure, as many PCs support those technologies but don’t have them turned on. Other systems will need to be replaced, although not necessarily right away: Windows 10 support will continue until at least 2025.

With the significant increase in ransomware attacks, putting off anything that increases the security of PCs comes with inherent risk, and it may be wiser to go early rather than late on this latest Windows version. Best practice, however, is to wait at least two months after general release before deploying to make sure new problems are identified and corrected before your installation. Often a good time for an update like this is during the holiday break, where any problems will have a minimal impact on productivity.

One last note: When I checked the security features after the Windows 11 installation, they were turned off, and I had to turn them on manually. Do check these features if you load the current build of Windows 11; the irony of installing a more secure version of Windows 11 only to find security turned off is painful at best.

Thunderspy attacks: What they are, who’s at greatest risk and how to stay safe

Petnet goes offline for a week, can’t answer customers at all