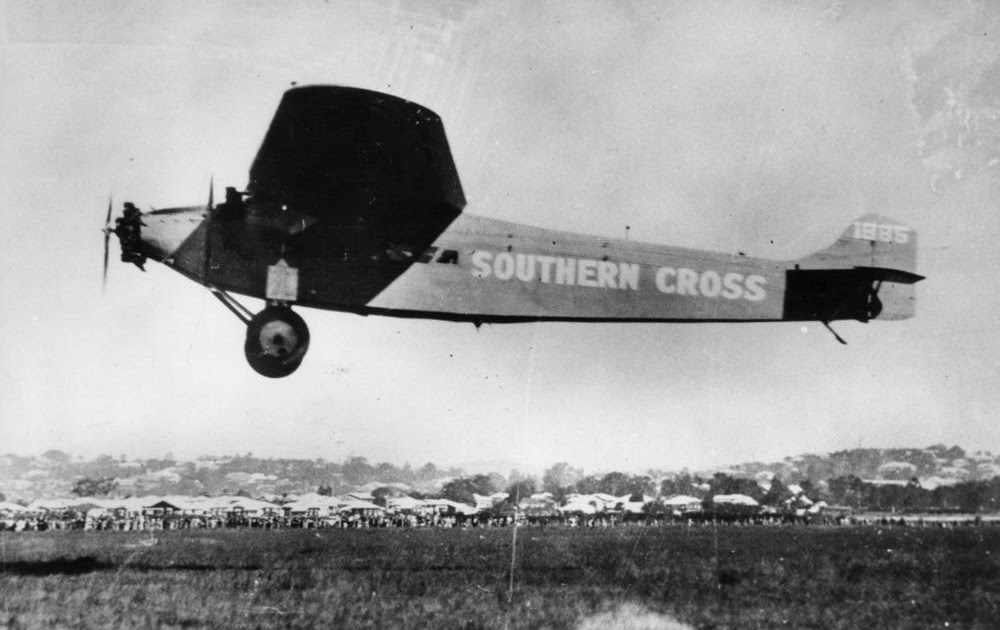 There are a few ways to arrive at the answers. What I’ve outlined below is the most direct way to get to the answers. (Thanks again to Daniel Russell’s Joy of Search for inspiring the development of search challenges like this one).

Step 1: Identify the airplane and its historical significance.
The image itself gives us a big hint. Do a quick Google search for “southern cross airplane” and the top result will be a Wikipedia page about the airplane. It’s important to include “airplane” in the search because searching Google for just “southern cross” will put a music video of the Crosby, Stills, and Nash song Southern Cross at the top of the results. Further down the search results page for “southern cross” you’ll find links to articles about the constellation of the same name, links to an energy company, and links to a Brazilian award for chivalry. In fact, you won’t see any reference to an airplane in the first ten pages of Google search results when searching “southern cross.” Furthermore, “southern cross airplane” isn’t even a term that Google suggests when you enter “southern cross.”

As mentioned above, the top Google search result for “southern cross airplane” is the Wikipedia page about the airplane. Read through that page and you’ll learn that it was the first aircraft to be flown from the United States to Australia.

Step 2: Identify who flew on the airplane.

Once you’ve identified who the members of the flight crew were, the next step is to figure out which one had a connection to Maine. To do this, open the Wikipedia page for each member of the flight crew then use keyboard commands of CTRL+F (Windows computers) or COMMAND+F (Mac computers) to search each page for the word “Maine.” Only the pages for Charles Kingsford Smith and Harry Lyon include a match for “Maine” and the match on Smith’s page is only found in the context of the word “remained.” Lyon’s page includes “Maine” as part of a link to the Maine Memory Network’s website which is mentioned in the hints for this challenge.

Step 3: Find the reference to Paris Hill.
If you follow the link to the Maine Memory Network from the Wikipedia page about Harry Lyon, you’ll find a fairly long article about Lyon and his life including that his parents bought a house on Paris Hill and Lyon later lived there.

Alternatively, you could have followed the hint about using the Maine Memory Network’s website then headed there to do a search within the site for references to Harry Lyon.

Step 4: Find the reference to a car.
At the very bottom of this Maine Memory Network page about Harry Lyon you’ll see a picture of Lyon sitting in a car in his driveway in 1927. (The image is copyrighted so you’ll have to view it there).

Step 5: Identify the car.
This is the hardest part of the whole challenge. To do this you’ll want to enlarge the picture found on the Maine Memory Network’s article about Lyon. Fortunately, they provide a zoomable version of the image. By zooming in on the image you can look at some important details including the shape of the front door on the car, the shape of the front of the car, and a little badge on the front of the car.

At this point the process becomes a little bit of guesswork followed by a process of comparison and elimination. There are some points to consider before guessing at what kind of car is in the picture. Here’s a list of those points to consider:
First, the picture was taken in 1927, a year before the flight of the Southern Cross.
From reading about him, we know that Lyon was not a man of exceptional wealth, but probably middle to upper-middle class.
Based on Lyon’s financial standing as well as looking at the details of the car we can probably remove luxury brands from our guesswork.

When we zoom-in on the car we can see that it has some imperfections as the result of driving and or post-manufacturing modification. Notable, there are what appears to be two wooden bench seats behind the driver’s seat. The back half of the body appears to be wooden as well.

Now that we’ve considered the points above we can start guessing at the manufacturer of the car and the production year. Noting that cars didn’t significantly change from one model year to the next at this time, if they did at all, we’re guessing the year according to decade or half-decade is a viable approach to this challenge. At this point, turning to Google Image search is our next step. A search for “1920s cars” or “1910s cars” is a starting place. However, those results generally feature examples of luxury cars of the time. We’re looking for cars that could have been owned by middle to upper-middle class people of the time. At this point in the process it’s helpful to have a list of American car manufacturers of the 1910s and 1920s. Again, we may turn to Wikipedia for such a list or to any number of antique car websites for such a list.

Based on the lists of American car manufacturers and what we know about Lyon, Ford is the most common guess as it was the most popular brand in the United States at the time and is still in the forefront of Americans’ minds today when they think of automobile manufacturers. Some adults will still think of Studebaker as an American car manufacturer. Dodge is also a common guess as it satisfies both the price and popularity components of our quest. So now it’s a matter of comparing pictures of cars produced by those manufacturers during the 1910s and early 1920s.

Use Google Images to find images of Ford, Studebaker, and Dodge cars produced in those decades. Compare the pictures closely to those of the picture of Lyon sitting in his car and you’ll start to notice that the shape of the door in his car doesn’t match those of Ford and Studebaker (they’re not as rounded at the bottom). The front of Lyon’s vehicle is also more rounded than that of the Fords and Studebakers made at the same time. A final detail is on the hood of the car when we look at the radiator caps of the vehicles. In all three cases, the Dodge examples are consistent with what we see in the picture of Lyon in his car. The final answer is a Dodge Touring car produced around 1919 (give or take a year) that was modified in the back.

Disclosure: I spent at least ten hours comparing images of cars to the one of Lyon sitting in his car. To verify my information about the car I enlisted the help of one the top antique car preservationists in the country, Jeff Orwig. Jeff is a friend of mine and the curator of Bob Bahre’s exquisite car collection housed on Paris Hill in Paris, Maine. You can read more about the collection here.

What happens when you put iPhone chips in Macs?