Home Technology Where is Soft RoboticsHeading? 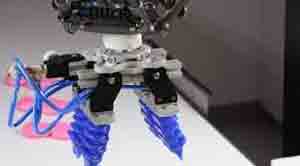 Wearable soft robots, prosthetic limbs, and origami muscle robots are some of the most promising applications for soft robotics.

FREMONT, CA: With the introduction of soft robotic technology, anything that people once thought was impossible can now become a reality, from re-growing shattered limbs to producing mighty muscles. Since the invention of the first soft robots in 2011, this technology field has grown with potential in practically every industry imaginable.

What are Soft Robots and How Do They Work?

Soft robotics is the branch of robotics that takes its inspiration from nature the greatest. Soft robots, unlike standard robots, work with materials that are very flexible and compliant, such as silicone elastomers and hydraulic fluidics. Soft robots can now perform numerous humanoid activities that were previously unachievable with traditional robotics.

Wearable soft robots, prosthetic limbs, and origami muscle robots are some of the most promising applications for soft robotics. Biomimetics has typically been the focus of each field, but these technologies can be applied to a wide range of applications once established. When combined, these robots can usher in the next biomimetics revolution and change the way people live and function as humans.

What’s Next for Soft Robotics?

Soft robotics has a promising future. There is a lot of research going on in this sector, and the technology’s applications are nearly unlimited. Origami robots, for example, can be utilized as climbing robots for building maintenance and inspection. The field of prosthetics is expected to grow in the future, with the ability to mimic both animal and human mobility. Accurate mimicking of animal movements can potentially have a significant impact on the automation sector. Wearable technology is also expected to become available to the injured and the general public, assisting them in theirdaily tasks.

However, there is no doubt that biomimetics—the study of emulating nature—will be the industry most affected by the introduction of soft robotics. Soft robotics, on the other hand, allows one to experience the real thing. Current technology in the sector just uses stiff bodies to produce the illusion of fluid movement. Bird flight is a great example of this. Although it is commonly known that bird flight is the most efficient mode of transportation, gliders and ‘bird drones’ merely simulate bird flight with stiff bodies. Only with the advancement of soft robotics can actual avian flying be conceivable. One can anticipate going from illusion to reality very soon if the field of soft robotics continues to progress at its current rate.

How to control your Android phone with your eyes

How to Identify Which Version of Google Sites You’re Using

How to Quickly Create a Transcript of a Google Meet Meeting

In a first, Amazon launches a battery-powered portable Echo speaker in India – TechCrunch