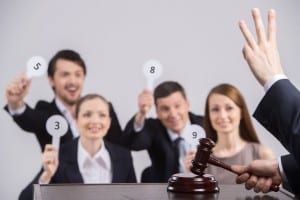 The UK’s mobile network operators are poised to start bidding in the country’s second 5G auction, with the reserve prices for the available frequencies coming it at north of £1 billion.

The auction kicks off on Friday, and EE, O2, Three and Vodafone will all take part, Ofcom confirmed earlier this week. The operators will be bidding for spectrum in the 700 MHz and 3.6 GHz-3.8 GHz bands.

It’s a fairly standard auction procedure, with the operators bidding for lots of spectrum round-by-round until demand is exhausted. That’s phase one. The second, or assignment phase, will be held over one round and will establish the operators’ actual positions on the spectrum. There could also be a period of spectrum trading between the winning bidders in the 3.6 GHz-3.8 GHz bands as they look to secure contiguous spectrum blocks.

Ofcom said it will announce the winners of the first stage as soon as possible after its completion – with the overall results coming after the assignment phase – but with wild disparities between the time taken to complete recent 5G auctions in other international markets, it’s anyone’s guess when that will be.

Looking at the UK rationally, it seems unlikely that there will be any massive surprises. We’re not looking at a month-long, $81 billion process akin to that famously experienced in the US earlier this year, nor should it be a ‘blink and you’ll miss auction’ like Spain’s 3.5 GHz sale in February.

“H3G [Three] seems unlikely to bid in a meaningful way for the 5G spectrum (3.6GHz+) but is expected to share the 700MHz band with EE. With the three leading operators likely to split the 3.6GHz+ spectrum between them, proceeds of £1bn-£2.7bn are conceivable,” said Enders Analysis in a note late last year.

Not a lot has changed since then.

Nonetheless, Ofcom does not appear to be expecting a super-fast outcome, pointing out that “spectrum auctions can take some weeks to complete,” depending – naturally – on the level of demand. It has pledged to publish daily updates on the progress of the auction.

That’s 200 MHz of spectrum in total with a combined reserve price of £1.1 billion.

The regulator has imposed a 37% cap on overall spectrum holdings which restricts EE to 120 MHz, Three to 185 MHz, and Vodafone to 190 MHz, while O2 is unaffected by the cap due to its current holdings. Given the size of the cap, realistically none of the operators will be much affected by it.

Because it will not have the scale of the US 3.7 GHz auction, for example, it would be easy to write off the UK sale as something of a non-event, but it’s worth pointing out that the process will increase the total amount of spectrum available for mobile technology in the UK by nearly a fifth, as Ofcom loves to point out, which is no small amount. The sale may lack the wow factor, but it is important.