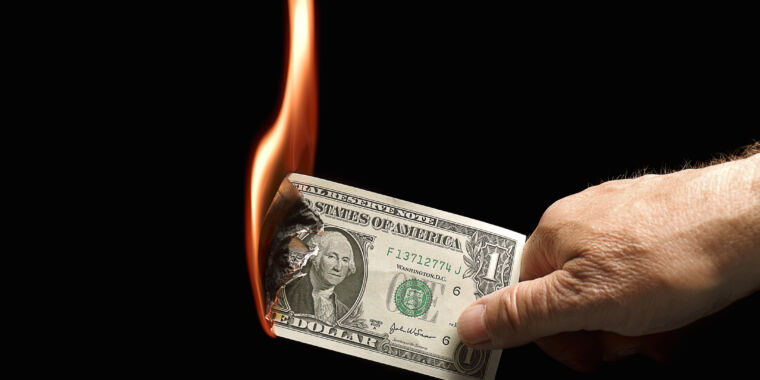 Frontier Communications is raising its sneaky “Internet Infrastructure Surcharge” from $4 to $7 later this month, widening the gap between its advertised broadband prices and the actual prices customers pay.

Telecom providers love to advertise low rates and then sock customers with bigger bills by charging separate fees for things that are part of the core service. In cable TV, that means customers see one advertised rate for a bundle of channels and then pay way more after the addition of “Broadcast TV” and “Regional Sports Network” fees that supposedly cover the costs of certain channels that are part of the bundle. With Frontier Internet service, customers pay the advertised rate for Internet service and then get hit with fees including the Internet Infrastructure Surcharge.

While some fees cover costs that providers must pay to the government, the Internet Infrastructure Surcharge is decidedly not one of them. In its list of fees, Frontier describes the surcharge as follows:

In other words, the fee covers the cost of providing the Internet service that customers are already paying for in the advertised rates. If Netflix priced its video service this way, the company would advertise one price and then charge an extra fee for “streaming infrastructure” or something similar.

The Internet Infrastructure Surcharge began at $1.99 in 2017 and rose to $3.99 the next year. It’s going up again this month, Frontier told customers in a message on their billing statements, the company confirmed in a new FAQ on its website.

“Effective February 21, 2021, the Internet Infrastructure Surcharge will increase to $6.99,” Frontier’s message on customer billing statements said. (Thanks to Stop the Cap for pointing out the change.)

Frontier’s advertised first-year prices range from $50 to $80 a month for its fiber service, while the regular rates are $10 higher once promotions expire. Slower DSL plans start at $35 a month during the first year.

“We have worked hard to keep our rates for broadband services unchanged. However, Internet use has grown significantly and so have our related costs,” the company said in its new FAQ.

Last year, Washington State Attorney General Bob Ferguson found that Frontier “fail[ed] to adequately disclose its Internet Infrastructure Surcharge fee in advertising” and forced the ISP to stop charging the fee in the state. The settlement occurred just after Frontier sold its network in four Northwestern US states to Ziply Fiber, and Frontier continues to charge the fee in the 25 states where it still operates.

Customers complained about the increase on a DSLReports forum. The Frontier fee is similar to CenturyLink’s “Internet Cost Recovery Fee,” which is $3.99 for now.

When contacted by Ars, a Frontier spokesperson said, “The increase applies to Frontier customers based on individual service packages and reflects increasing maintenance and other network costs, including the rapidly rising costs of supporting our customers’ increased Internet traffic and usage, and consumer demand for greater bandwidth, services, and other requirements that affect our Internet network. Customers on price-lock and promotional pricing will not see this increase until their terms expire.”

Frontier filed for bankruptcy in April 2020 and is trying to exit bankruptcy early in 2021. The ISP has a track record of failing to invest in fiber, chronic outages, poor customer service, and missing broadband-deployment deadlines after taking government funding.

Frontier to charge fee for “as long as necessary”

The Frontier FAQ said the Internet Infrastructure Surcharge may eventually be added to the advertised price instead of being a separate charge. “We are working to incorporate this surcharge into the price of your primary Internet service. Until this work is completed, the Internet Infrastructure Surcharge will appear as a separate line item on your bill,” Frontier said. The company didn’t say how long it will remain a separate charge.

“The current plan is to continue to charge this surcharge as long as necessary to ensure 24×7 support of Internet access. This fee will be reviewed on a regular basis,” Frontier said elsewhere in the FAQ. Frontier also said it has not “implemented price increases in the past two years,” though raising the fee is in reality a price increase.

At first cat lawyer was embarrassed. Then he realized we all could use a...

What this bald eagle and neural network depiction have to do with future U.S....