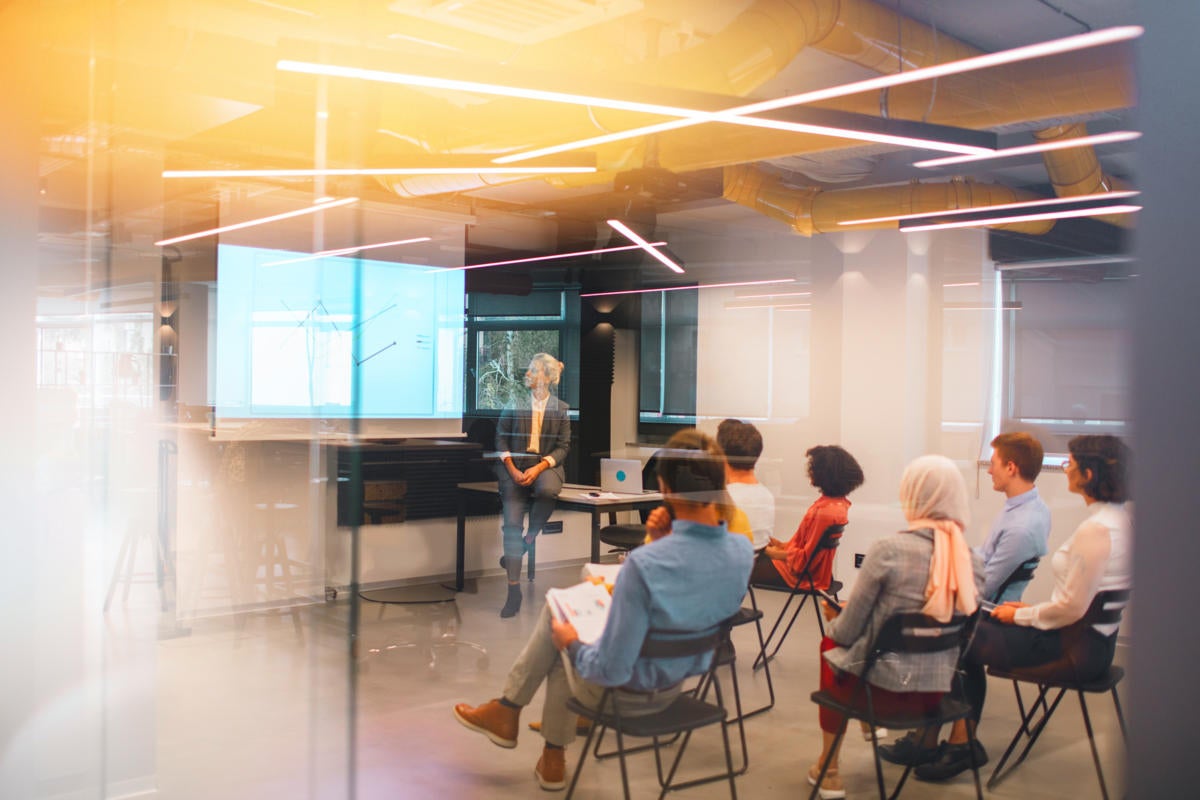 Whether you’re leading a sales call, a training session, or that hoped-for breakthrough presentation to the higher-ups, why not wow them by wirelessly connecting your laptop, tablet, or phone to the room’s projector or large display? With the right gear, it’s easier than you might think.

What’s that? No one at your company has been to the office in the past 10 months because of a global pandemic? The good news is that some of the same inexpensive devices that stream entertainment media over a home Wi-Fi network — Chromecast, Apple TV, Roku, and others — can also be used in the boardroom. You can practice now while you’re working from home, then be ready to hit the ground running later on when vaccines finish rolling out, the pandemic recedes, and offices reopen.

These 11 devices plug into a projector, large monitor, or TV to mirror the display of a laptop, tablet, or smartphone so you can make presentations from your own device — and from anywhere in the room. Some use an HDMI cable for connecting to the display or projector, while others resemble a large thumb drive that plugs directly into the screen’s HDMI port.

Even the largest can travel with you or be permanently (and unobtrusively) installed to a display in a conference room, or even a TV in the den for the work-at-home crowd. Then, all you need do is walk in, tap the device or a few keys, and you’re on the big screen. (See some typical setup instructions.)

All of the mirroring devices in this roundup support HD resolution of at least 1920 x 1080 pixels, the standard for business graphics, and some of the newer listed here can handle 4K resolution of up to 3820 x 2160 pixels, showing four times as much detail. To many this will seem like overkill, but it’s perfect for a company for going over the architectural renderings of a new factory, previewing a UHD commercial, or zooming in on a high-resolution image.

The bad news: Most of these devices do not fit all business situations. Consider:

That said, a few newer devices do mirror a broader range of systems. If you’re really serious about accommodating all types of laptops and mobile devices, you should consider getting a device with broader support. Otherwise, choose the one that best suits your needs based on what people use at your office. After all, with a multitude of choices, there’s never been a better time to present wirelessly.

Based on Apple’s AirPlay 2 technology, Apple TV 4K wirelessly mirrors material on a Mac, iPhone, or iPad in super-sharp 3840 x 2160 resolution. Unfortunately, you have to stay within the Apple ecosystem to use it, so forget about Androids, Chromebooks, and Windows devices.

With hardware similar to an iPad, the Apple TV 4K has an A10X Fusion processor and either 32GB ($179) or 64GB ($199) of storage for presentations, videos, and the occasional movie or game. It uses the 2.4GHz and 5GHz Wi-Fi bands or a wired Ethernet LAN, has an HDMI port, and is powered by an AC cord.

The Apple TV can be controlled from across the room with its Siri Remote, which listens for commands. At 3.9 x 3.9 x 1.4 in., the Apple TV 4K is likely too big for the back of a TV, but third parties, such as Innovelis, make wall-mounting brackets.

Rather than mirroring the screens of every computing platform, the third-generation Chromecast and newer Chromecast with Google TV take a different approach. They allow Android phones and tablets to wirelessly share their screens, but Windows PCs, Macs, Chromebooks, iPhones, and iPads need to use one of the thousands of Chromecast apps available to “cast” to the big screen. The range of supported Chromecast apps includes the ubiquitous Chrome browser, YouTube, and Google Slides but ignores corporate mainstays like PowerPoint and Keynote.

Both Chromecast devices are small with flat HDMI cables for plugging into a display and take advantage of the 2.4 and 5GHz bands of a Wi-Fi network. The USB port of a newer display or TV should be able to power either device, but they each include an AC adapter, just in case.

The HD-based Chromecast sells for $30, while the UHD Chromecast with Google TV costs $50, making them screen-sharing bargains.

IOGear’s Wireless Mobile and PC to HDTV Screen Sharing Receiver is a mouthful, but thanks to the use of a high-power proprietary chipset and high-gain antenna design, it offers the bonus of being able to stay connected from up to 50 feet away, according to the company. Better known as the GWAVRC, the IOGear receiver is for those who have large rooms to fill with wireless presentations and video.

Based on Miracast technology, the GWAVRC can share the screens of Windows PCs as well as Android phones and tablets over a Wi-Fi network using either the 2.4GHz or 5GHz band. It can’t connect with Chromebooks, Macs, iPhones, or iPads and tops out at 1920 x 1080 resolution.

At 3.4 x 2.6 x 0.6 in., the GWAVRC device can sit next to or behind the TV or display. It comes with a USB AC adapter, but recent TVs and displays should be able to provide enough power for its operation. With the ability to send signals across more space, the IOGear GWAVRC could be the long-distance mirroring champ for your office.

Happily, it retains the unique design of its predecessor, featuring a 21-inch cable with an HDMI plug at one end and a USB connector at the other. In between is a small box of electronics. This design lets you plug both ends into the back of a TV or display, so the display is both receiving a signal via the HDMI plug and supplying power through the USB plug. The device doesn’t include an AC adapter for displays without a USB port.

Officially, it can mirror a variety of Microsoft Surface devices, but it should work with just about any recent Miracast-enabled system, like Windows 10 PCs or Android phones and tablets. It ignores Apple gear and Chromebooks, though.

Capable of wirelessly mirroring up to a 3840 x 2160 resolution stream, the 4K Wireless Display Adapter uses the 2.4GHz and 5GHz Wi-Fi bands. Easy to set up, the device makes it a snap to quickly put a 4K presentation or video in front of your colleagues without a cable in sight. The device lists for $60, but we’ve seen it for about $20 less at online retailers.

Interviews with more than a dozen designers on Jeff Bezos's design philosophy, and why the retail infrastructure, not industrial design, is Amazon's true legacy...

How to Use Pictures in Flippity Templates

Google says 80% of Android apps now encrypt network traffic by default, due to...