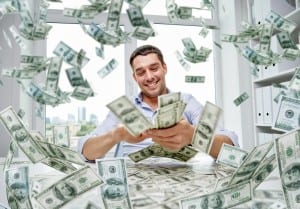 Facebook, Amazon, Apple, Alphabet, and Twitter have all just published their quarterly numbers and, while fortunes differed, yet more wealth was moved up the food chain.

The superstar of the night was by all measures Amazon, which broke all of its own records set last quarter. The total revenues reached $96.1 billion, up by 37%, while the operating profit almost doubled last year’s level to reach $6.2 billion. The net income growth was even more astonishing: it trebled last year’s amount to reach $6.3 billion.

Although the profit margin of 6% may look modest, it is probably worth remembering that for many years, even after it turned profitable, Amazon had been used to operating on margins around 1%. AWS continued to shine: the cloud business contributed 12% of revenue but generated 57% of operating profit.

With all financial metrics being so shiny, there seems to be little to talk about for the CEO. Instead, Jeff Bezos focused his canned remarks on Amazon’s social contribution. “Two years ago, we increased Amazon’s minimum wage to $15 for all full-time, part-time, temporary, and seasonal employees across the U.S. and challenged other large employers to do the same. Best Buy and Target have stepped up, and we hope other large employers will also make the jump to $15. Now would be a great time,” said Bezos.

“Offering jobs with industry-leading pay and great healthcare, including to entry-level and front-line employees, is even more meaningful in a time like this, and we’re proud to have created over 400,000 jobs this year alone.” COVID-19 has changed consumers’ buying behaviours, as Amazon is looking towards a different Q4. “We’re seeing more customers than ever shopping early for their holiday gifts, which is just one of the signs that this is going to be an unprecedented holiday season,” he added.

If Amazon’s story is one of continued high flying, Goole parent company Alphabet’s represents a satisfying comeback. Alphabet’s total revenues increased by 14% from a year ago to reach $46.2 billion. The group’s operating income grew by 22% to $11.2 billion, while its net income increased by 59% to reach $11.2 billion. The internet giant registered a healthy increase in ads income, including both spending on Google search and related properties and on YouTube.

Google Cloud increased its income by 45% to reach $3.4 billion, one of the key contributors to the growth. YouTube non-advertising revenues and other Google businesses (in particular Google Play) also registered healthy growth. YouTube now has over 30 million music and premium paid subscribers, and over 35 million including those on free trials. YouTube TV now has more than 3 million paid subscribers, Sundai Pichai told analysts.

Pichai was clearly pleased with the renewed growth, though he also acknowledged that Alphabet’s strong performance was “consistent with the broader online environment.” He also attributed the success to the “deep investments we’ve made in AI and other technologies, to deliver services that people turn to for help, in moments big and small.”

Both Pichai and Ruth Porat, the CFO, highlighted the importance of Google Cloud. Lagging behind Amazon and Microsoft in cloud computing sphere, Google is “very encouraged by the pace of customer wins and the very strong revenue growth in both GCP and Workspace; that we do intend to maintain a high level of investment to best position ourselves,” Porat said. From next quarter, Google Cloud will be reporting as a separate segment, Pichai announced.

The only company that largely relies on physical product sales, Apple’s was dented by the delayed launch of iPhone 12 series. Despite that sales revenue edged up by 1% over a year ago to reach $64.7 billion, the growth was more than offset by increased operating cost, which drove both operating profit and net profit down, by 5% and 7% respectively.

Weakness in iPhone sales has caught all the attention. The segment that accounted for 41% of the total business contracted by 21% to register a net sales of $26.4 billion, from $33.3 billion a year ago. The biggest drop occurred in Greater China, where iPhone sales declined by 29%, which cancelled out all the growth, albeit small, recorded in other regions. Meanwhile the strong performance of Services should not be overlooked. The segment registered a sales growth of 16% to reach a net revenue of $14.5 billion. Mac and iPad both hit historical high with $9.0 billion and $6.8 billion sales, up by 29% and 46% respectively.

However, all eyes are still on iPhone, and the weakness in China. Tim Cook decided to look towards next quarter backed by the positive reception to the new 5G-equipped iPhone 12 line-up. ““Despite the ongoing impacts of COVID-19, Apple is in the midst of our most prolific product introduction period ever, and the early response to all our new products, led by our first 5G-enabled iPhone lineup, has been tremendously positive,” he said. Luca Maestri, the CFO, was also confident of the company’s fortunes in China in the near future.  “We had new iPhones in China a year ago, this year we didn’t. We’ll be growing in China in the December quarter,” Maestri told the Financial Times.

One of the two leading social networks that have been in the centre of plenty of controversies recently, Facebook saw its revenues growing by 22% in the quarter over a year ago to reach $21.5 billion, and its operating profit growing by 12% to reach $8.0 billion. Net income increased by a more impressive 29%, thanks to a one-off income tax benefit. Both daily and monthly active users (DAUs and MAUs) grew by 12%, to reach 1.82 billion and 2.74 billion respectively.

However, the DAUs and MAUs in North America, where they generate by far the highest ARPU, actually came down sequentially, and the user numbers in Europe, Facebook’s second highest ARPU region, did not grow. Facebook sees the slight decline in user numbers in the US and Canada continue in Q4, among other uncertainties. In particular the company highlighted the new iOS 14 which will make ad targeting and measurement more difficult.

Still Facebook is upbeat in its statement. “We had a strong quarter as people and businesses continue to rely on our services to stay connected and create economic opportunity during these tough times,” said Mark Zuckerberg. “We continue to make significant investments in our products and hiring in order to deliver new and meaningful experiences for our community around the world.”

It turns out Facebook isn’t the only company to be put off by Apple’s new operating system that makes targeted advertising harder. Twitter, the other social network to announce its results, saw its share price plunging by 16% pre-market, despite registering a 14% revenue growth to reach $936 million and 29% “monetisable daily active users” (mDAU) growth to reach 187 million. The main reason for the battering was Twitter’s announcement to further delay its new advertising platform, called MAP, due to iOS 14 making ad tracking more difficult.

Add Interactive Annotations to Images With a New Classtools Tool

Free Technology for Teachers: The Way of a Ship