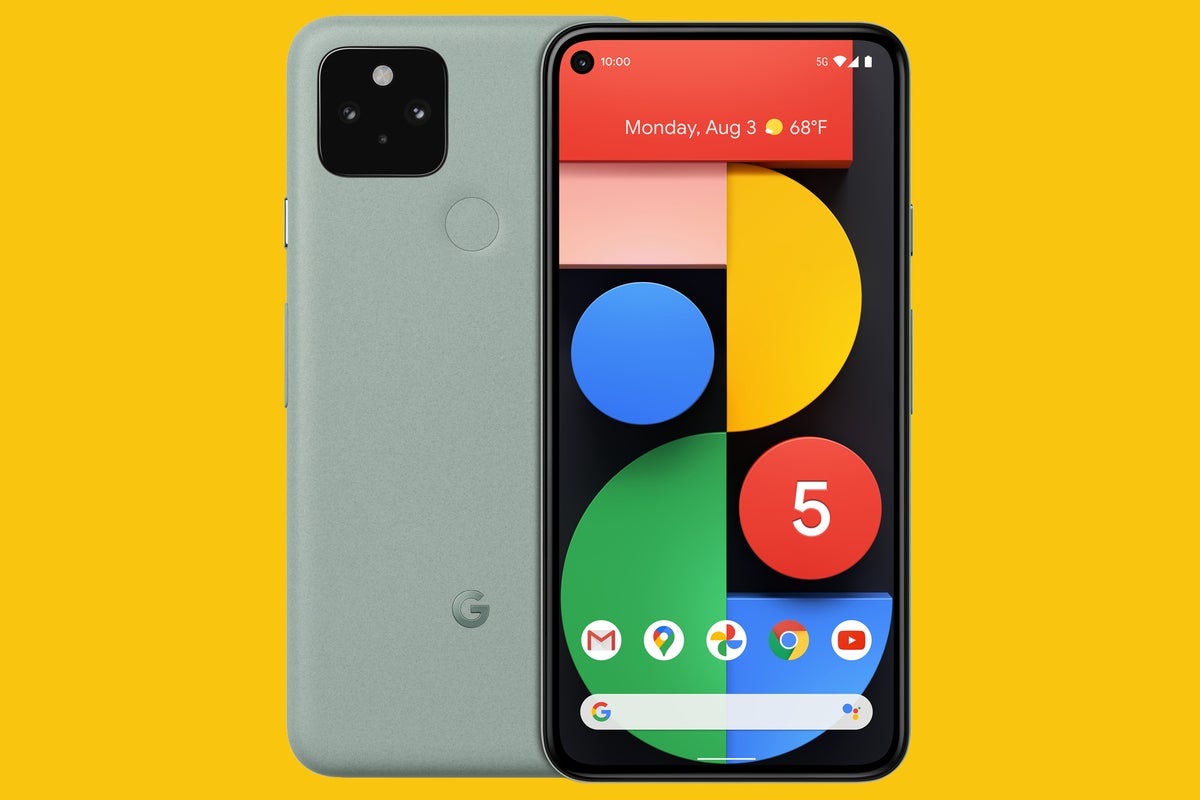 What is a “Google phone”? That’s a question I’ve been trying to wrap my moist mammal-brain around for many a moon now, and the answer has rarely stayed still for long.

Early on, back when the “Google phone” concept first came around with the Nexus line of devices (pour one out, everyone), the idea was meant to represent a dramatic shakeup of the phone-buying experience. The first Nexus phone, the now-classic Nexus One, had not only high-end hardware (for the time) but also a wild-seeming web-based sales model where you’d buy the phone unlocked, direct from Google, and without any carrier involvement. (Things were pretty different back in the prehistoric time of 2010 — as this Nexus launch video will quickly remind you.)

The idea of the “Google phone” eventually evolved to mean a niche-level device for developers, enthusiasts, and other people in the know. For a while, it also meant a device focused on value — such as with 2012’s luxurious Nexus 4, which sold for a mere $299 unlocked and off-contract at a time when most companies were hawking flagships for that kind of money only if you locked yourself into an over-the-top two-year contract and agreed to pay an ongoing ransom via your carrier.

When Google moved from the Nexus brand to the Pixel brand in 2016, it made it clear the days of niche devices and value products were a thing of the past. The first Pixel started at $649 — a high price by 2016 standards and a hefty hike from the bargain-bin costs we’d grown accustomed to expecting up to that point. Google told us it was laser-focused on the high-end, luxury phone market with mainstream appeal firmly in sight and enterprise adoption as a broader long-term goal.

Well, five years later, it looks like the idea of the “Google phone” is changing once again — and this time, it’s shifting at least a little back toward a direction from its past. The Pixel 5, announced this week and on sale now for $699, feels like a deliberate pivot from the Pixels that preceded it. And it feels like an interesting new mashup of some of Google’s previous Pixel strategies.

There’s the price, of course: At $699, the Pixel 5 is a good bit less expensive than last year’s Pixel 4, which started at $799 for the regular-sized model and $899 for the larger XL version. Whereas most phone prices typically only go up from one year to the next, this one is actually going down (and that’s to say nothing of its comparison to the more typical flagship phone of the moment, which rarely starts below $1,000).

That drop is obviously a calculated move, and it sure seems to be connected to a shift in strategy at the very heart of what the Pixel brand — the “Google phone,” as it were — represents.

Pixel 5 and the ‘Google phone’ pivot

A little over a year ago, I proposed that 2019’s Pixel 3a might one day be seen as Google’s “Moto G moment” — that point when a less expensive phone becomes the breakaway hit and ends up reshaping its company’s core strategy for success. With the Pixel 5 this year, it looks like that prophecy’s starting to play out.

For evidence, we need look no further than the decisions Google made with its Pixel 5 philosophy — like, for instance, the decision to skip the cutting-edge processor found in most current flagship phones and go instead with a more modest, middle-of-the-road chip or the decision to stick with a 1080p-resolution display instead of embracing the super-duper-quad-HD-ultra-thousand-plus (or whatever the hell they’re calling ’em these days) panels many top-of-the-line handsets possess.

Those decisions were well-considered. While there’s certainly a small but vocal subset of spec nerds who’ll scoff at any device that doesn’t have the best possible parts, no normal person is gonna notice the difference between a Snapdragon 865 processor and a Snapdragon 765G chip (or even know such a difference exists, for that matter). And no one without superhuman vision is gonna be able to tell the difference between a good 1080p screen and a display with some absurdly over-the-top resolution — not at this size, anyway.

Quite frankly, the strategy brings to mind what we saw with the also Google-made Moto X, which similarly shunned top-of-the-line specs for a more modest package and a focus on real-world experience. I mean, just look back at what I wrote about the Moto X when it came out in 2013:

If you’re looking for specific isolated pieces of technology … the Moto X probably isn’t the phone for you. It’s by no means a perfect device, and there are absolutely individual areas where other smartphones come out ahead.

But if you’re looking for a thoughtfully designed phone with genuinely compelling features — and, most important, a cohesive and outstanding overall user experience that’ll delight you from the moment you pick it up — you’ll be hard-pressed to find another product that matches what the Moto X provides.

Feels familiar, no? While a full assessment of the Pixel 5 is still pending, it seems safe to say the ambition with it is to focus less on numbers on a page and more on the practical experience you get from using the product — and to include a sensible array of pieces that support that experience without packing in fat simply for the sake of saying it’s there.

The comparisons to past efforts, both Moto X and Nexus, are unavoidable — but the situation itself absolutely isn’t the same. Unlike in its Nexus-making or even Moto-owning days, Google now has a consistent, premium-feeling package with an actual marketing and distributing machine behind it, and it has a proposition that could genuinely appeal to business-minded buyers. Rather conveniently, we’re also now approaching a point where lots of folks are feeling burnt out on thousand-dollar phone prices and actively looking for lower-priced alternatives.

Now, sure, there’s plenty of room for error and obviously no guarantee the Pixel 5 will see any manner of mainstream success — but look, that’s Google’s problem to obsess over, not ours. What we can say is that the foundation seems solid, the strategy seems sound, and the phone seems like a smart buy (provided, of course, that the reviews confirm our hopes that the device is everything we expect it to be). It plays into the success Google’s seen with its modestly priced midrange Pixel “a” level of phones and feels like an inevitable shift toward what was actually working — a higher-end option for anyone who appreciates the advantages Google’s Pixel line offers but wants them in a fancier package with some extra creature comforts and yet without an astronomical price tag attached.

Especially when you consider that the Pixel line is the only place on Android where you get a guarantee of near-instant operating system and security updates for a full three years from a phone’s launch — and when you then consider how poorly most other Android device-makers do on that front in comparison (not to mention how frequently those manufacturers add extra data-harvesting systems and spammy ads into their devices’ software) — well, it’s easy to see how a $700 phone like the Pixel 5 could resonate with professionals and anyone else interested in an optimal Android experience.

All of that being said, the shift we’re seeing with the Pixel 5 isn’t entirely rainbows and roses.

The thorny side of Google’s Pixel backtrack

The downside — the shame of Google’s Pixel pivot and the company’s scaled back approach to the Pixel 5 — is what we’re losing in the process. And I’m not talking about the higher-end processor or the previously-present shiny glass exterior; I’m talking about the ambitious and intensely promise-packed technology Google debuted with the Pixel 4 last year and now seems to be abandoning entirely.

That technology was originally known as Project Soli and eventually branded as Motion Sense in the Pixel 4. It was a radar-based chip system that allowed the phone to sense even the tiniest hand movements and respond accordingly. It was some seriously sci-fi-level stuff and something that seemed ripe with potential.

In practice, it mostly failed to win us over. The Pixel’s implementation of Soli radar basically boiled down to a handful of limited and often inconsistent gestures for controlling audio playback and silencing sounds. Google assured us that was just the start — that just “as Pixels get better over time,” in the company’s words, “Motion Sense [would] evolve as well.” Google wanted to give us all time to get used to this new manner of interacting with our devices, the thinking went, and it’d expand the system’s unique “language” and capabilities as time moved on.

And yet, here we are. One year later, and the system’s barely evolved from its original form — and by all signs is now as good as dead.

The Soli-enabled gestures themselves are honestly no huge loss, but what does sting is the loss of the potential this type of technology presented — the knowledge that we’ll never know what could have come from this system, had it been given the time and the resources it needed to mature. It’s a classic Google about-face, as I put it earlier this year — yet another one of the company’s many moments of having some inspired idea, breathlessly convincing us of its value, and then losing interest and moving on instead of nourishing the notion and allowing it to develop.

On a more immediate and practical level, it also seems to mark the end of the merely one-year-old secure face unlock feature for Google’s Android phones — another shame, as the system worked incredibly well, added valuable security into the Pixel proposition, and (as I can attest to from personal experience) was one of those things you wouldn’t want to give up once you’d grown accustomed to its convenience.

In the grand scheme of things, though, maybe losing those more luxury-level elements in order to create a more affordable Pixel phone is a price Google has to pay if it wants to turn its homemade phone program into a sustainable business. Now let’s see if this latest strategy is one the company actually sticks with — or if we find ourselves thinking about yet another “Google phone” pivot by this time next year.

Italian networks having a bit of a wobble under the strain – Telecoms.com

Free Technology for Teachers: Some of my Favorites

The Value of Data Science in Risk Management

Why I Make Video Tutorials