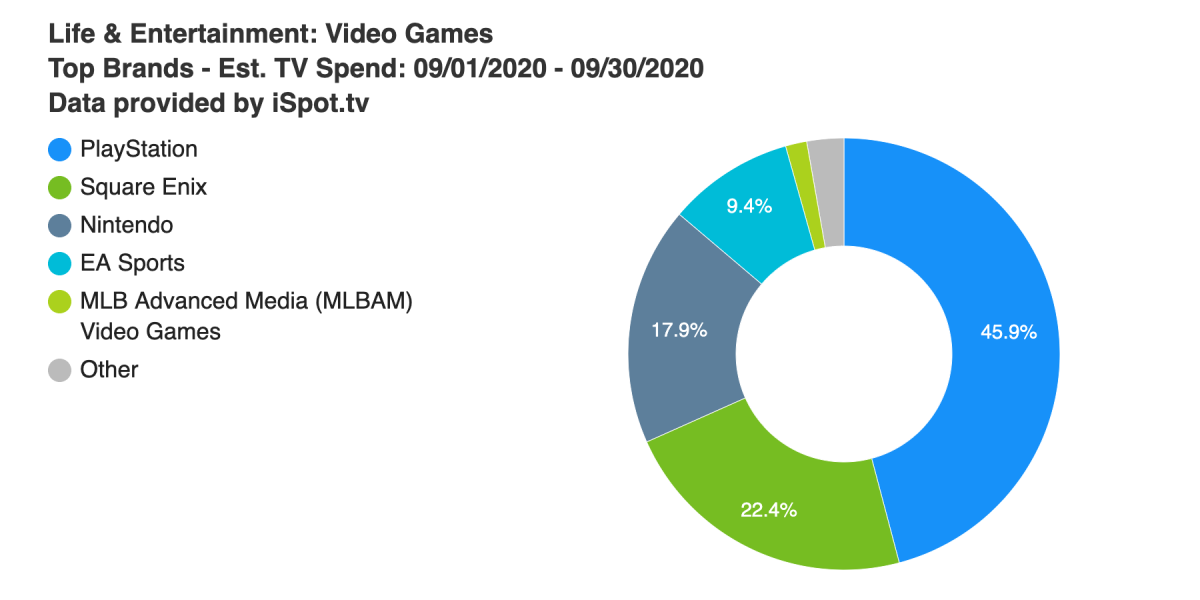 The TV advertising spree for gaming brands continued in September with a 76.35% increase in estimated spend, up to $39.5 million from August’s $22.4 million. This is the largest TV ad outlay we’ve seen from the industry in 2020 so far, although it represents a slight (- 0.65%) decline from gaming TV spend in September 2019.

PlayStation was back on top, commanding nearly 46% of the industry’s budget. Overall, 13 brands aired 51 spots over 6,500 times, generating nearly 1.6 billion TV ad impressions. Sports, and in particular the NFL and NBA, were big drivers of impressions for gaming brands.

GamesBeat has partnered with iSpot.tv, the always-on TV ad measurement and attribution platform, to bring you a monthly report on how gaming brands are spending. The results below are for the top five gaming-industry brands in September, ranked by estimated national TV ad spend.

PlayStation spent an estimated $18.1 million airing five spots over 1,500 times, resulting in 573.6 million TV ad impressions. The spot with the largest outlay (estimated at $8.7 million) was “The Edge: Play Has No Limits.” The brand prioritized reaching a sports-loving audience, with top programming including the NBA, the NFL, and MLB. Top networks by outlay included ESPN, ABC and Adult Swim.

Third place goes to Nintendo, which spent an estimated $7.1 million airing 24 commercials over 2,600 times, racking up 379.6 million TV ad impressions. “She’s My Favorite: Animal Crossing,” promoting the Switch, was the spot with the biggest outlay (est. $1.3 million). SpongeBob SquarePants, The Loud House, and The Amazing World of Gumball were three of the top shows by spend, while top networks included Nick, Cartoon Network, and Teen Nick.

EA Sports takes fourth place with an estimated spend of $3.7 million on four ads that ran 297 times, resulting in 231.7 million TV ad impressions. The spot with the most estimated spend, $1.9 million, was “A New Era Feat. The Spokesplayer,” featuring King Keraun. EA Sports only ran spots on sports-related programming, with the top ones by spend being the NFL, the NBA, and college football; top networks included ESPN, ABC, and NFL Network.

For more about iSpot’s attention and conversion analytics, visit iSpot.tv.

How to Quickly Create a Transcript of a Google Meet Meeting

Q&A with Vint Cerf, who has been working on building an internet for space,...

Why more CIOs are focusing on digital business acceleration talent