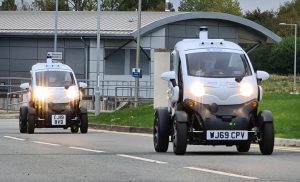 O2 has opened a new lab in the UK that will serve as a testbed for autonomous vehicles – the great white hope of the tech sector.

The facility, located at the Harwell Science and Innovation Campus in Oxfordshire, will let companies explore how 5G and satellite could potentially enable autonomous driving. It is called the Darwin SatCom Lab, and is part of Project Darwin, a four-year trial programme supported by O2 and the European Space Agency (ESA).

Nokia is supplying the 5G equipment, while geosynchronous satellite coverage comes courtesy of Spain-based Hispasat. As for the vehicles themselves, they are two Renault TWIZYs – which resemble glorified golf buggies – that O2 has converted into connected autonomous vehicles (CAVs) by equipping them with lidar.

It is interesting that O2’s new lab offers satellite connectivity in addition to 5G. With 3GPP working on integrating non-terrestrial networks into the 5G standard, the lines between satellite and terrestrial network technologies are becoming decidedly blurred.

“The lab is further proof that O2 is at the forefront of connectivity and accelerating Britain’s recovery by helping British businesses to harness the power of 5G and satellite communications in order to benefit their customers. It’s the next step in getting autonomous vehicles on the road and making the UK’s transport network greener,” said Derek McManus, COO of O2 UK, in a statement.

Indeed, one of the tests already underway at the lab aims to explore how CAVs can optimise their routes to keep a lid on CO2 emissions. By using satellite imagery of local biodiversity, the system can direct a CAV along routes based on the likely level of carbon capture from trees near the roadside. For a kick-off, O2 said the findings will inform how its retail partners carry out last mile deliveries.

Of course, this could be just another of many false starts for the autonomous driving sector. For years now, driverless cars have been just over the horizon, but never seem to make it onto the road in meaningful numbers.

Alphabet’s Waymo subsidiary has been working on the problem since it was part of Google’s X lab in 2009. It used to share monthly crash reports, but now it just publishes an annual safety report that waffles on ad nauseam about how brilliant and safe their autonomous vehicles are, without actually backing it up with figures.

Meanwhile, when he’s not rambling incoherently, or tweeting defamatory insults at genuine heroes, Tesla CEO Elon Musk likes to talk about the progress his electric car company is making with full self-driving – a capability that has been just around the corner for years now.

And then there’s Uber, which made headlines for all the wrong reasons after one of its driverless cars did what everyone knew was going to happen one day: it unfortunately killed a pedestrian. Putting it mildly, the incident threw a bit of a spanner in the works when it came to commercial launch.

In 2018, IHS Markit predicted that a meaningful volume of driverless cars would be on the road by 2019, thanks to players like Uber and Waymo. At the time, it reckoned volumes would top 51,000 in 2021, as for the first time individual buyers got behind the wheel – well, sort of.

So, forgive the resounding tone of scepticism here, but I’ll believe the tech industry has finally cracked driverless cars when I get stuck behind one in traffic.

Finding Success at Each Stage of Your Threat Intelligence Journey