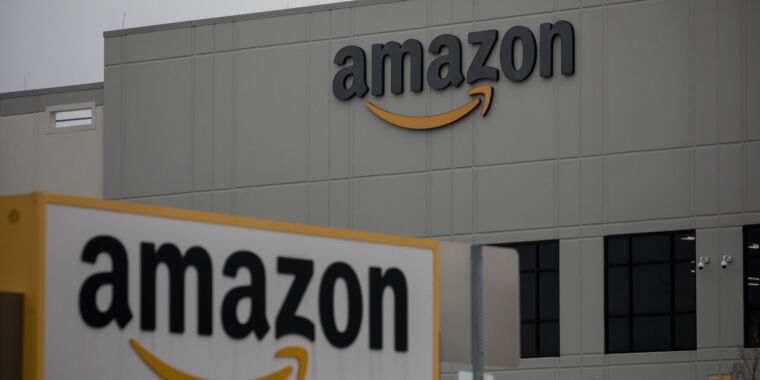 Of 1.37 million people who worked either in Amazon distribution facilities or in Whole Foods stores during that period, 19,816—or about 1.44 percent—have had COVID-19, Amazon said. The company released the number in the context of a corporate blog post boasting of success with its mitigation measures.

“If the rate among Amazon and Whole Foods Market employees were the same as it is for the general population rate, we estimate that we would have seen 33,952 cases among our workforce,” Amazon wrote. “In reality, 19,816 employees have tested positive or been presumed positive for COVID-19—42% lower than the expected number.” The calculations do not include Prime delivery drivers, most of whom technically are not Amazon employees.

Amazon shared a state-by-state breakdown (PDF) showing where infections per 1,000 employees stand as compared to its projections and as compared to state-level data. For most states, Amazon’s case count is indeed lower than the state-level count. That said, the company is clearly having some issues with hot spots: in both West Virginia and in Minnesota, Amazon’s infection rate is higher than both its projections and the community rate. The rate for Amazon workers is also higher than the state rate in New Hampshire.

Earlier reporting by Bloomberg found that one warehouse outside of Minneapolis had an infection rate more than four times higher than the rate in the surrounding community, which likely contributes to Amazon’s 3.17-percent case rate in Minnesota. That media brought that number to light, however, highlights the larger problem with Amazon’s handling of COVID-19: its lack of transparency.

Amazon’s release of the data follows an in-depth report NBC News published Wednesday investigating the spread of COVID-19 in Amazon’s warehouses. NBC found that Amazon’s “lack of transparency” made it incredibly difficult for both workers and public health officials to get any useful information about the spread of the novel coronavirus inside Amazon facilities.

The first known COVID-19 case in an Amazon facility was identified in March, when an employee at a warehouse in Queens, New York, became infected with the disease. Throughout the spring, workers complained that Amazon was not doing enough to protect employees inside distribution centers.

One employee, Chris Smalls, was fired from his job at the Staten Island warehouse in March shortly after he helped organize a walkout in protest of Amazon’s handling of the coronavirus. Company leadership promptly tried to smear Smalls as “not smart or articulate” and tried to paint him as the sole face of worker opposition. Amazon also fired three tech workers and suspended a fourth after those employees, based in the company’s Seattle headquarters, voiced concerns about the company’s treatment of its warehouse workers.

Employees still frustrated with the lack of clear information have tried crowdsourcing volunteer data-gathering efforts, NBC said this week, as workers are only receiving vague information from Amazon. “The texts we get distinguish between whether there was one case or multiple cases found that day, but that’s as specific as it gets. You don’t know whether they were on your shift or in the same section as you,” one fulfillment center employee told NBC. “To my knowledge no one in my facility was even told they were close enough to a positive case to quarantine, and it’s a pretty small facility, so it seems impossible that no one came into contact with one of the people who was sick,” he added.

Amazon told NBC that the notifications are kept vague for privacy reasons and added that it uses camera surveillance systems to trace employees’ movements for contact-tracing purposes. The company also said in its blog post that it aims to reach 50,000 tests performed per day by November, which would work out to testing about 3.6 percent of its front-line workforce every day.

Athena, a broad coalition of racial justice and workers’ rights groups, called on both Amazon and public health officials to do better.

“Since March, workers and their communities have been demanding these numbers from Amazon. Workers faced retaliation, including the risk of losing their job, just for standing up for their own health and the health of their neighbors,” Athena Director Dania Rajendra said. “Public officials must immediately launch investigations into Amazon and demand that the company report data on COVID-19 cases from this point forward—publicly, regularly, and truthfully. It couldn’t be more clear that Amazon cares only about its own bottom line and that lawmakers must compel them to, at the very least, tell the truth.”

How to Use Pictures in Google Forms

The Differences Between American and Canadian Thanksgiving