Home Business End of an era as Singtel CEO Sock Koong hands over the... 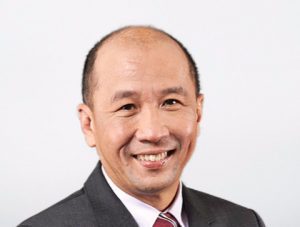 His appointment comes after Chua Sock Koong, who has been at Singtel for 31 years – serving as CEO for 13 of those – announced plans to retire.

“Sock Koong is one of Singapore’s most successful CEOs and has played a key role in making Singtel the operationally and financially strong company it is today,” said Singtel chairman Lee Theng Kiat, in a statement. “Under her leadership, Singtel added Optus in Australia to its portfolio, building an unrivalled footprint across Asia, with stakes in all the lead telecom players in India, Indonesia, Philippines and Thailand.”

During her tenure she also oversaw Singtel’s digital transformation, the establishment of its cyber security business, and the growth of its enterprise division, he said.

“In recent months, Sock Koong led the team on its 5G investment plans that not only promises 5G coverage for Singapore but repositions Singtel for growth in the converging world of telecoms and tech,” he added.

Her successor, Moon, has been at Singtel since 1993, and has held various senior positions in marketing, business development, and at its Indonesian arm Telkomsel. He was appointed CEO of Singtel’s domestic consumer operation in 2012.

“Sock Koong has set an inspiringly high bar and I will do my utmost to build on the success of Singtel,” Moon said. “I’m honoured to be given the opportunity to lead Singtel at this exciting juncture, with 5G changing the game not just for the telecoms sector but enterprises across industries.”

Sock Koong is stepping down after what has been a challenging year for Singtel and the sector as a whole. In its most recent quarter, group revenue fell 14 percent year-on-year to S$3.54 billion ($2.58 billion). EBITDA plummeted to S$897 million from S$1.18 billion. Its mobile customer base remained broadly flat year-on-year at 4.26 million, but blended ARPU fell nearly 28 percent to S$23 per month.

“I’ve seen a few global crises on my watch – the dot.com bust, the global financial crisis, the India competition challenges – and I’m proud of how we’ve weathered those storms and businesses challenges. I’ve always said that Singtel’s strength lies in the resilience of our people and I’m confident this will see us through the current COVID crisis as well.” Sock Koong said.

“It has been an immense privilege to be involved in Singtel’s growth and transformation. It has been an amazing 31 years,” she added.

When It Comes To Security Tools, More Isn’t More

Free Technology for Teachers: All About Plants