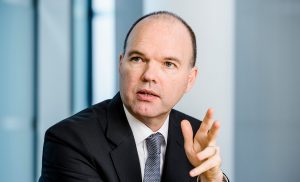 Nick Read reckons there’s not enough competition in Italy, but too much in Portugal and the Czech Republic, all countries in which Vodafone does business.

Public lobbying is a tricky business. If you just say something like “I want more/less of this because it benefits/harms me,” you don’t tend to get much sympathy. So chapter one in ‘lobbying for dummies’ tells you to disguise your personal agenda as an uninvited crusade on behalf of the downtrodden masses.

Thus Vodafone paid to have an impassioned plea from its CEO published in Politico, which is presumably read by European political types. Read summarises his point by opening that “Monopolies and forced competition are bad for consumers, Europe’s digital economy and EU law.”

If you think that comes over like he wants it both ways, you may be onto something. Not many people would disagree with his assertion that monopolies are bad, but it’s somewhat counter-intuitive for Read to moan about both too little and too much competition in the same piece. Perhaps Vodafone’s recent PR hiring spree left it with too little budget for two Politico spots.

That’s not to say he doesn’t have a point in both cases. In Italy the government has been pushing for a consolidation of the fibre infrastructure market into a single provider. There are presumably many good reasons for wanting to do so, with the greater speed and efficiency of fibre roll out resulting from no longer duplicating effort presumably among them.

But a monopoly is a monopoly, no matter who owns it, and they all suffer from the same vices. When you don’t have to compete for business you have little incentive to moderate prices or put much effort into delivering a decent service. So Read is right to flag this up as a negative development for anyone who will be dependent on the single provider for their wholesale fibre connectivity.

Read’s beef with Portugal and the Czech Republic is that they’re trying to create a new fourth MNO player that would compete with, you guessed it, Vodafone. There’s the standard muttering about being forced to share spectrum and network roaming with the newbies provides a disincentive for the incumbents to invest in their networks. This is just a minor adaptation of the argument MNOs always use when they’re not happy with regulatory moves.

A more compelling argument is that neither country has made the case for the kind of market failure that requires such muscular state intervention. Read directly appeals to the European Commission to do something about it, something he has presumably already done in private to no avail, possibly because the bloc is obsessed with four being the magic number of MNOs.

The decision to lobby publicly like this implies Read has been frustrated when raising his concerns through more conventional channels. While he has a point about Italy, you have to wonder if his loathing of monopolies would be undiminished if Vodafone was set to be the beneficiary instead of TIM. Similarly we suspect the odd regulatory inconsistency could be indulged if it furthered the corporate cause. Competition, it’s a funny old game.

Zoom from Teacher and Student Perspectives