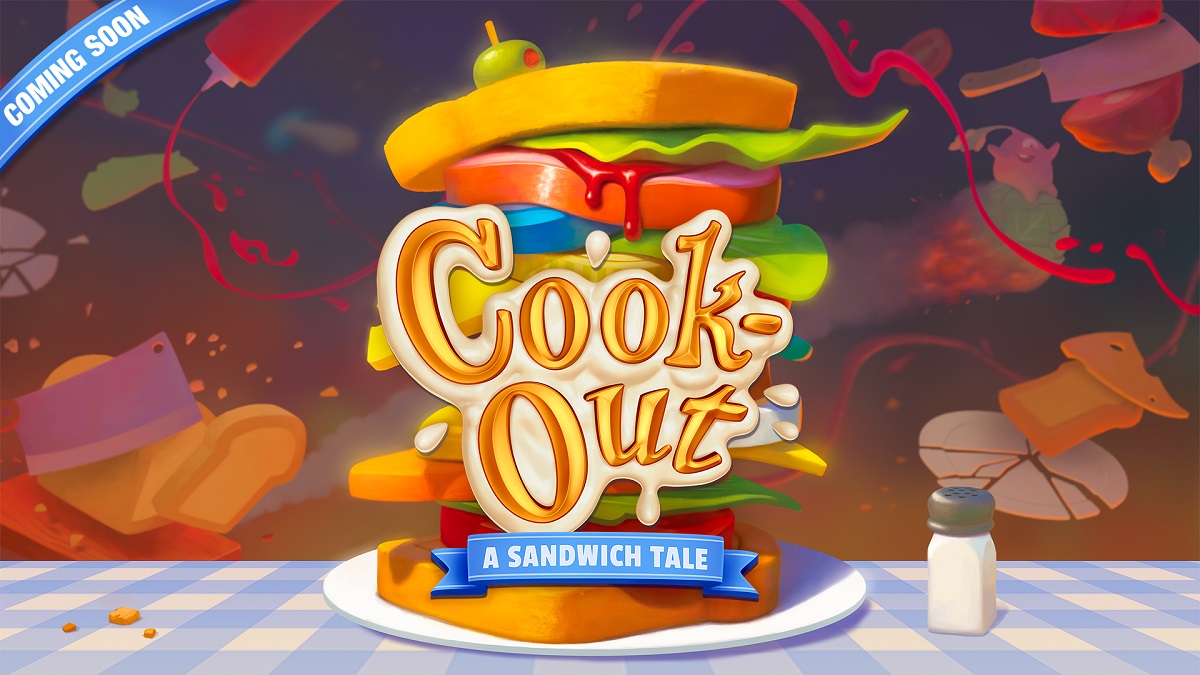 Resolution Games, the creators of virtual reality experiences with millions of downloads, is launching its virtual reality game Cook-Out: A Sandwich Tale today on the Oculus Rift and Oculus Quest VR headsets. The game has you building sandwiches for hungry animals in a kitchen with up to four line cooks. Despite the stress of the VR kitchen, I enjoyed myself.

Cook-Out is part of the Stockholm-based company‘s continuing quest to make accessible, casual, and funny VR games to help drive mainstream consumer adoption of the tech. Headed by Tommy Palm, the studio has previously created titles such as Angry Birds VR: Isle of Pigs, Bait, and Acron: Attack of the Squirrels. The latest game, Cook-Out, is pure culinary chaos with a sense of stress reminiscent of “Oh, I messed up the order” in games like Diner Dash or Overcooked.

I played Cook-Out as a four-player co-op experience on the Oculus Quest with Palm, producer Gustav Stenmark, and journalist Ron Burke of Gaming Trend (see his review). We played together in a frenetic session as four chefs in a kitchen, racing against time to keep your clientele at the sandwich shop happy. Customers take the form of fable animal characters, like werewolves, cats, dogs, or mice. And they’re all hungry. The game has a cartoon style and it brings that visceral feeling of being a cook to VR.

Above: Cook-Out: A Sandwich Tale has up to four players in co-op cooking.

While the game is focused on co-op, solo chefs will be able to play with the help of a simulated robot partner. I started out by choosing an avatar. I didn’t dwell on that, but Palm and Stenmark had some pretty cool pirate outfits. We dove right into the co-op play, starting with an easy level. (I’ve embedded Burke’s video of our gameplay session).

One of the great things here is the voice communication, as it worked superbly. Whenever someone needed help, they could simply shout and ask for it. If they saw something important happening, like a customer getting impatient, they could sound an alarm and get people to focus on delivering a sandwich before the customer went away.

Each cook has a station with things like bread, cheese, meat, garnishes, and some special capabilities. We all stand around a cooking table, facing each other. In the middle of the table is a spinning roundtable, or a lazy Susan, where you have to put plates down. As an order comes in, the plate pops up with a number corresponding to the order. You look above the customers to see what the recipe calls for. 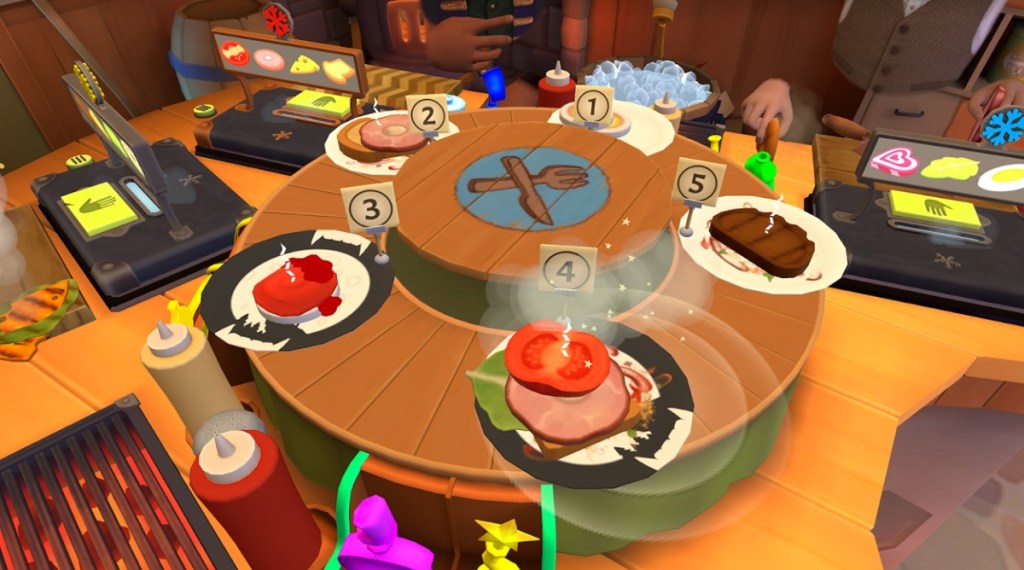 Above: The graphics of Cook-Out: A Sandwich Tale are functional.

You have to place the ingredients down in the right order and stack them neatly using your VR controllers. That means you physically make pinching motions with the controller to pick things up and then let go of them to put them on the plate.

No single cook can make a dish alone. You have to rely on others to help. Some ingredients are shared. A couple of players might have access to carrots or onions. But some are held by a single player. In the single-player version, you can get help from a robot chef, who helps you as long as you keep it powered up.

Those ingredients changed over time. For instance, I was the only player with access to squid for a while, and later I was the only one with mushrooms. So that meant I had to be on the ball when the lazy Susan came my way and the recipe called for my one-of-a-kind ingredient.

The artwork is funny. You pick up a bottle of ketchup or mustard and squirt it out on the dish, making a big mess as it splatters onto the plate. The first levels were relatively easy, as we served as many as five customers at a time but at a slower pace. We got all of the recipes right and the customers went away with mostly satisfactory ratings.

I was in charge of bread rolls, eggs, cheese, and ham. Over time, this changed to include special items like carrots. We had to learn to grill some items like carrots without burning them. If they caught on fire, we had to put out the flames with an extinguisher. And then we had to toss the item on the floor. I also had two special magic vials. If I poured the blue one on my knife, I could chop up the bread more easily as it sharpened the knife. And if I poured the white vial, it dropped tofu on the cutting board. And I could use that as a substitute item for any ingredient that a recipe called for. The tofu came in handy when we were in a huge rush.

I found it to be stressful when I was falling behind. But when I was in a rhythm, it felt like I was in a state of flow where I could keep up even as the action dialed up. I found myself reaching across the table to toss a piece of bread, sometimes inaccurately, because I couldn’t wait for the lazy Susan to come around. I loved the thrill when I was able to toss an item onto a sandwich just in time. 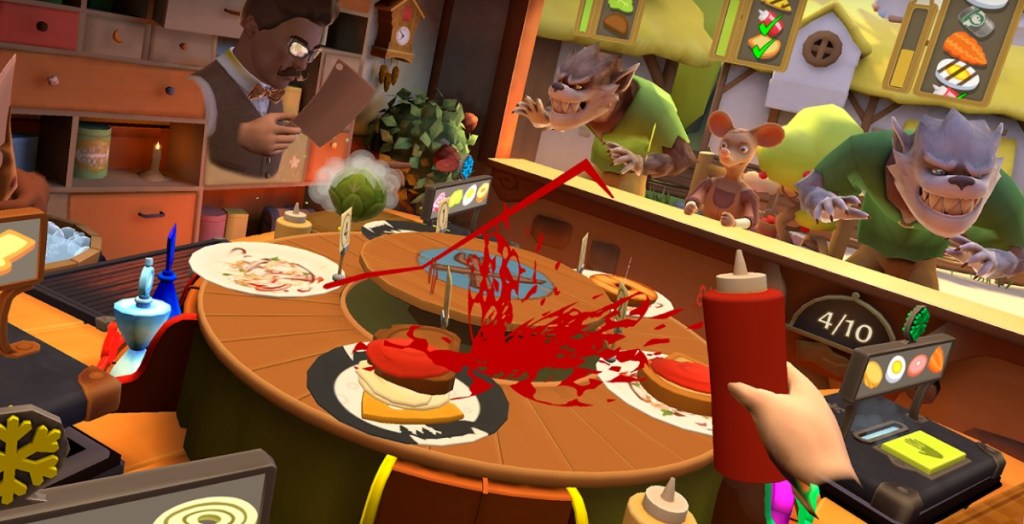 Stenmark was a chef once upon a time, and he had a unique appreciation for the life of a short-order cook. I could tell that the team spent around two years working on the game, as it had a lot of polish and it had a surprising amount of content, even though it generally takes place in the very confined environment of a kitchen. We found that late-stage modes were really hard to play because the customers got impatient very quickly. Still, we pretty much kept up with the pace.

Cook-Out has more than 50 levels spread out across 18 towns. We also played an Endless Mode, where you just keep going until you can’t do it anymore. We worked so hard on that one that we were sweating and hit a new record.

We spent more than an hour playing the game, working up a sweat and having a lot of laughs. If that’s what you like in your VR games, I highly recommend this title.

The game is out on September 3 on the Oculus Rift and Oculus Quest for $20. Resolution Games provided GamesBeat a copy of the game for the purpose of this review. 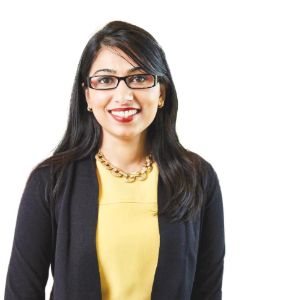