Home Business China’s biggest chip fab is next in the US crosshairs – Telecoms.com 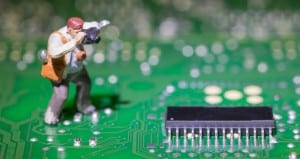 It has been reported that the US government is thinking of putting SMIC on its entity list, which would confer similar restrictions to those afflicting Huawei.

The news comes courtesy of Reuters, which cites an anonymous Defense Department official as the source. A Pentagon spokesperson confirmed that agencies are mulling whether to put Semiconductor Manufacturing International Corporation on the entity list, which prevents US companies and anyone else who wants to stay in America’s good books from doing business with them unless given explicit permission to do so.

Upon learning of the potential move, SMIC issued the following statement. “SMIC solemnly declares that the company, a public company listed on the Hong Kong Stock Exchange and the Sci-Tech Innovation Board (STAR Market), is an international semiconductor foundry strictly complying with the laws and regulations of all jurisdictions where it performs its businesses.

“Since its inception, the company has been fully compliant with all rules and laws. SMIC has maintained long-term strategic partnerships with multiple U.S.-based semiconductor equipment suppliers. Over the years, the Bureau of Industry and Security (BIS) has granted numerous export licenses for the Company.

“With a large and diverse customer base, serving companies in the U.S., Europe, and other Asian regions, SMIC plays an important role in the global semiconductor supply chain. The Company manufactures semiconductors and provides services solely for civilian and commercial end-users and end-uses. We have no relationship with the Chinese military.

“In and before 2016, SMIC had been granted Validated End-User (VEU) authorization by the BIS and the company hosted several visits from U.S. Government officials.  Any assumptions of the Company’s ties with the Chinese military are untrue statements and false accusations. The Company is in complete shock and perplexity to the news. Nevertheless, SMIC is open to sincere and transparent communication with the U.S. Government agencies in hope of resolving potential misunderstandings.”

It’s hard to view this as anything other than a continuation of the game of cat and mouse the US is playing with Huawei, in an apparent bid to drive the company out of business. Huawei’s ability to procure chips for its phones are severely curtailed by its inability to use Taiwanese fab TSMC, but there’s still the possibility of it switching to Mediatek chips manufactured by SMIC. The remote possibility that this could be done without using any US IP seems to be one the US is thinking of pre-empting with this move.

What to do when customers complain