Home Business Jio lobbies for a head start on its 5G network – Telecoms.com 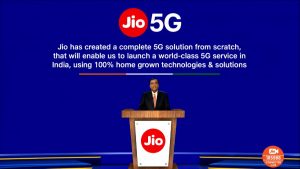 Flush with mountains of fresh investment, Indian telco Reliance Jio has unveiled its greenfield 5G plans and wants spectrum for it ASAP.

Last week CEO Mukesh Ambani revealed Jio has developed a 5G solution ‘from scratch’, implying it wasn’t relying on anyone else for any part of it. He also said it would be available to trial just as soon as the Indian government makes the requisite spectrum available. You can see the announcement in the video below.

Now, according to a Business Standard report, Jio has applied for 800 MHz of mmWave spectrum and 100 MHz of 3.5 GHz band from the Indian Department of Telecoms. As other Indian media have noted, this request comes despite there being no sign of official 5G spectrum auctions in India, so it seems Jio is once more looking for special treatment from the Indian state.

The regulatory environment for Jio has been incredibly benign for its entire existence, from being given a special national license to the crippling historical license fees being imposed on its competitors. As a result Jio now fancies itself as the world’s first ‘super operator’ and it seems to have the full backing of the Indian state in that ambition.

Ofcom action makes a difference on ‘follow me’ fraud – Telecoms.com