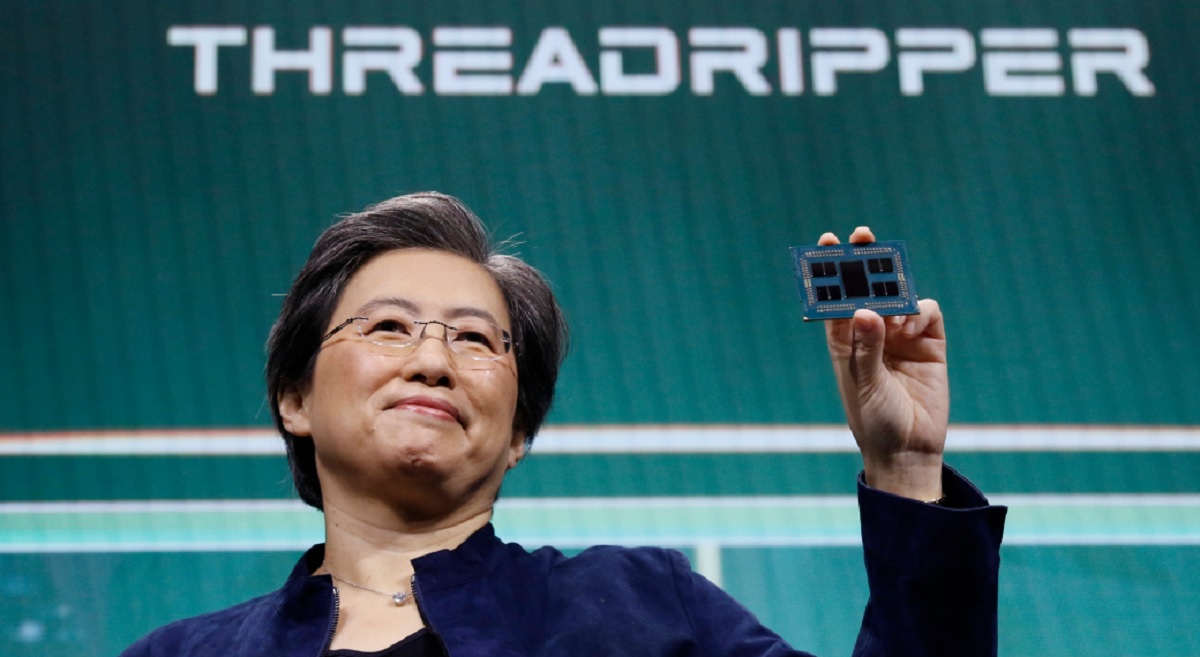 Advanced Micro Devices reported second quarter earnings today that beat analysts’ estimates as the company is capitalizing on a rare lead in performance over archrival Intel. The company posted a 26% gain in revenue for the second quarter ended June 30, compared to the same quarter a year ago.

Santa Clara, California-based AMD reported non-GAAP net income of 18 cents a share on revenue of $1.93 billion. AMD is in the midst of a historic upswing as it is exploiting its advantages over Intel, including a well-defined Zen 2 processor architecture and a cost-efficient 7-nanometer manufacturing process with its partners. In after-hours trading, AMD’s stock price rose 7% to $72.34 a share.

In graphics, AMD is also challenging rival Nvidia with a new set of mainstream graphics chips. And AMD promises that it will continue to move fast when it comes to designing its next-generation processor architecture, dubbed Zen 3. On Tuesday, AMD said the good results were due to higher enterprise, embedded, and semi-custom revenue. The latter represents chips for game consoles. Sales have stayed strong in the pandemic as people working from home upgrade to new computers.

Analysts estimated AMD would report non-GAAP earnings per share of 16 cents a share on revenues of $1.86 billion. In the year-ago quarter, AMD reported adjusted earnings of 8 cents a share and sales of $1.53 billion. In the third quarter, revenues are expected to be $2.31 billion. For the third calendar quarter, AMD said that it now expects revenue of $2.55 billion, plus or minus $100 million, driven by Ryzen, Epyc, and semi-custom chip sales.

Intel announced on July 23 that it had a good quarter, but it also said it had run into delays on its 7-nanometer manufacturing (Intel measures this differently from the way AMD does), which is a disaster coming off of similar delays with its deployment of 10-nanometer production. Intel spends tens of billions on its chip factories and makes its own chips. But AMD designs its chips and farms out the manufacturing to contract chip manufacturers such as TSMC, which has not had similar troubles like Intel.

“We delivered strong second quarter results, led by record notebook and server processor sales as Ryzen [PC chip] and Epyc [server chip] revenue more than doubled from a year ago,” said AMD CEO Lisa Su in a statement. “Despite some macroeconomic uncertainty, we are raising our full-year revenue outlook as we enter our next phase of growth driven by the acceleration of our business in multiple markets.”

In an analyst call, Su said that the company has grown market share in processors for 11 quarters in a row. She said there are 54 Ryzen Mobile laptops in the market, and HP and Lenovo are launching more soon. She said that benchmarks show Ryzen Mobile chips beating Intel’s best in both performance and battery life.

“We passed a significant milestone in the quarter as we achieved our double-digit server processor unit share goal, based on broad adoption across cloud enterprise and HPC customers,” Su said.

AMD has a big sales cycle beginning as it is starting to deliver chips for the video game consoles. The company has deals with Microsoft on the Xbox Series X and Sony on the PlayStation 5 — two new consoles launching in the fall. That money is starting to come in as AMD ships chips to the companies as they move forward with assembling launch quantities in their respective factories.

“AMD had a solid quarter, revenue, and profit-wise, with 26% growth and a 3% gross margin improvement. Like we saw in Q1, AMD set some revenue records in Q2,” said Patrick Moorhead, an analyst at Moor Insights & Strategy, in an email to VentureBeat. “As in Q1, AMD set records in (the client computing group) CCG with the highest client processor revenue in 12 years, driving 45% growth and doubling Ryzen notebook revenue. In fact, this was the highest notebook revenues ever. I believe both these records were driven by the company’s increased competitiveness in notebooks, particularly with its Ryzen Mobile 4000 platform, which, in Q2, was selling in for back to school designs.”

In servers and consoles, Moorhead said, “While overall segment revenue was down, I was pleased to see that Epyc server CPUs set records as it doubled revenue year on year. I attribute most of this Epyc growth to cloud service, SaaS and HPC players embracing the platform more and more. It likely took share in the non-internet-of-things server space.”

In the analyst call, Su said that AMD has begun production of its next-generation console system-on-chip products, which combine a processor and graphics in the same chip. In response to a question on the call, Su said that the third quarter would be strong for console chip sales and the fourth quarter would be lower, given the usual launch dynamics. AMD has 11,400 employees.

Mac users are getting bombarded by laughably unsophisticated malware