Home Business Huawei says US is only hurting itself with sanctions – Telecoms.com 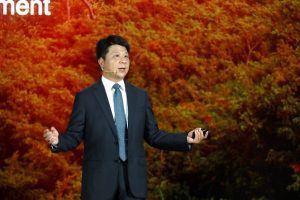 Speaking at this years’ virtual Huawei Analyst Summit, Rotating Chairman Guo Ping hit back at the US, suggesting it will only do more damage to itself by pursing its current course.

The keynote session from the newly rotated executive was one of defiance as a confident face was put on newly refined aggression from the US. The latest actions to inhibit Huawei’s supply chain will almost certainly have an impact, but it will continue to be a very prominent player in the telco industry.

“We have survived and forged ahead despite all the odds,” Ping said, while also boasting of the $120 billion in revenues achieved in 2019. “The US insists on persistently attacking Huawei, but what will that achieve for the world?”

Ping is referring to additional sanctions placed on Huawei at the end of last week. Announced by Commerce Secretary Wilbur Ross, the US will prevent any company around the world from using US equipment, IP or software to work with Huawei. The aim is to choke the vendors supply of components and semiconductors, a critical element of smartphones and telecoms base stations.

To mitigate these actions, Ping has said R&D is on the up, to remove dependence on US suppliers, while the business has been stockpiling. But there will be a material impact on operations eventually.

This is a mitigation strategy, softening the blow but it is not a concrete solution. The US semiconductor industry can do want few others can, cultivating specialisms which have taken years to fine tune. This cannot be replicated by China overnight.

“Our business will be inevitably impacted,” said Ping. “But we are confident in finding a solution soon.”

Huawei has consistently stated such actions for the US would be a net loss for the industry, but what is the risk? Ping is pointing towards industry fragmentation.

This is of course a dirty word in the telecoms industry, but Huawei’s warnings should be taken with a pinch of salt. Ping warned of standard fragmentation, which is a long-term risk, but it is not one which is emerging now. The immediate risk is two, independent ecosystems, the creation of two distinct markets. Suppliers would hate this, and there is a chance competition (and therefore prices) would be impacted for telcos.

However, there is not really a risk of standard deviation is the short-term. Like the US, Huawei seems to be playing a bit fast and loose with rhetoric and muddied statements.

Ping also suggested this would be a severe consequence for the US telcos, a lesson which they should have already learned.

According to the executive, during the 2G era US telcos did not align on standards whereas European counterparts did. This offered scaled business opportunity to European suppliers, while the US vendors have to deal with fragmentation. Ultimately, the US has no remaining vendors because of this, while the likes of Ericsson and Nokia have thrived.

This is a mishmash of the truth, half-correct statements, half-informed assumptions and missing information.

Firstly, European telcos backed GSM standards. The fragmentation of standards was not US in-fighting, but a Europe versus North America situation, with Europe winning out. Secondly, yes, US vendors were swallowed up by bigger and more successful rivals, but so were European ones. The likes of Siemens and Alcatel have been acquired during the same period.

The reason there are so few suppliers is because previous generations of bureaucrats embraced market consolidation in a way which would have turned stomachs today.

There might be some inaccuracies here, but the overall message is very relevant; isolationist policy is not the friend of the telecommunications industry.

Vodafone ranks number one in the Ofcom competition no-one wants to win – Telecoms.com

10 years of DevOps: With the hype cycle moving on – what’s next?