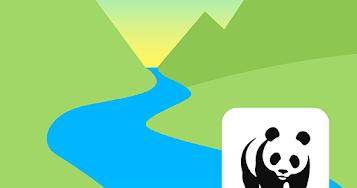 On the WWF’s Wild Classroom page you will find a list of upcoming livestreams and he target audience for those livestreams. For example, tomorrow’s livestream about bees is intended for students in second through sixth grade.

In addition to upcoming live broadcasts the WWF Wild Classroom page features daily lesson plans and activities. The activities were designed for use at school, but could easily be modified to be completed at home with the help of parents. Every lesson plan includes an activity outline, a video, and a related article. Archives of previous weeks’  lesson plans are available at the bottom of the WWF Wild Classroom page.

WWF Mobile Apps
One of my all-time favorite iPad apps was developed by the WWF. That app is the WWF Together App. It’s not the most advanced app you’ll find, but it is beautifully done. WWF Together now features the stories of threatened or endangered animals around the world. The stories include facts about the animals’ ranges, threats to their habitats, and latest news about efforts to help preserve these animals and their habitats. Within each story there is an opportunity for students to take a selfie with an animal. This is done through the use of augmented reality that lets users place an origami rendering of an animal into any setting including a selfie. And for those who want a hands-on activity, WWF Together includes directions for making origami animals.

WWF Free Rivers is a free augmented reality app produced by the World Wildlife Foundation. The app uses augmented reality to present a story about rivers. WWF Free Rivers tells students stories about the implications of changes in weather patterns, damming rivers, and pollution on river ecosystems. Students interact with these stories by moving their iPads and or by pinching and zooming on elements in the stories. Unlike some other AR apps the animations within WWF Free Rivers can be experienced by students from a variety of angles. A great example of this is found early in the app when students can see what a dam does to a river. During that experience students can see the dam from above, from below, and from the sides.

Top network skills to succeed in a post-coronavirus world

Narrow the Scope of Compliance