Last week, our team took the temperature of the VC ecosystem by surveying 33 early-stage VC funds in and around NYC. The survey looked at everything from investment activity in the near term to the importance of face-to-face meetings to what percent of a venture firm’s portfolio companies were at cash flow risk over the next 3-6 months. The results reveal a market that will be predictably lean for startups in 2020. But they also show that early-stage NYC VCs are more optimistic than expected.

91% of the early-stage NYC VCs we polled indicated they are still actively investing. 33% went so far as to say it was still business as usual. Only 9% have stopped investing in new deals altogether. Almost all, however, suggested there will be some kind of slowdown when it comes to investments in 2020. This is particularly good news for founders, who ranked VCs drying up as their number one fear post COVID-19.

Almost all the NYC VCs we polled expressed some level of comfort in investing remotely, which provides a glimpse into just how these deals will get done. Early-stage investors who are usually adamant about meeting founders prior to investments, seem to be more open-minded to virtual video meetings as an alternative to face-to-face meetings. Of those we surveyed, roughly half felt strongly about the importance of in-person meetings. 48% said in-person meetings are a very important precursor to an investment decision, while 46% said that, while they try to meet in person, they don’t require it. 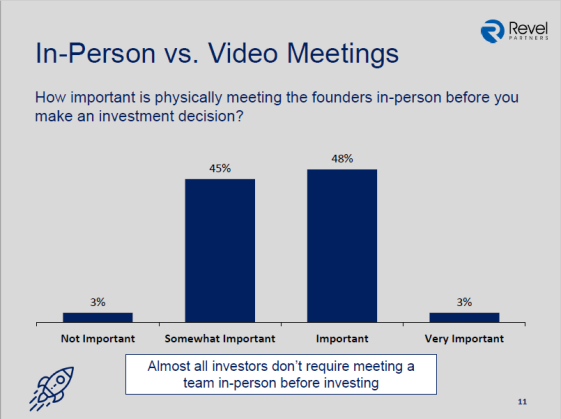 With most publicly traded SaaS companies down 40% or more this year, it’s not surprising that early stage valuations are also getting dinged. Just over half of the NYC VCs we surveyed expected valuations to drop between 20-40%. A little over a third indicated valuations would likely go down 10-20%. Only one investor felt valuations would stay the same.

It also comes as no surprise that this community of early-stage NYC investors are focused on businesses that are both recession and COVID-19 resistant. Those include telehealth and e-commerce companies as well as future-of-work platforms and infrastructure. Investors suggested businesses in the travel, hospitality, physical retail, restaurant, and real estate verticals will all face significant headwinds in the near term. In the new normal, businesses in those categories will need to have unusually strong balance sheets and a compelling picture of the underlying business to see much traction over the next 6 months. 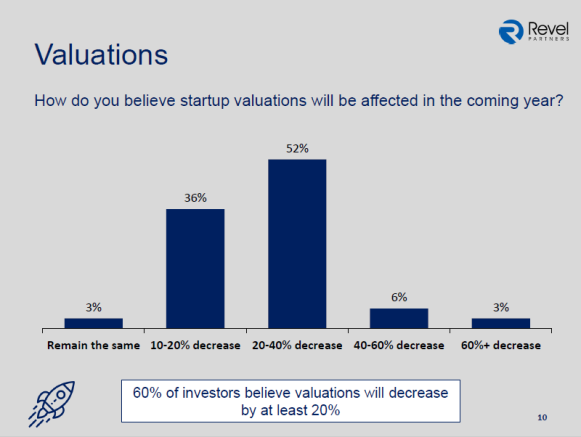 With a recession now looming, another important question is just how bad things will get for each fund’s portfolio. The overwhelming majority of NYC VCs we polled (72%) indicated that less than a quarter of their investments will be at cash flow risk over the next 3-6 months. Only 28% of this group of investors think that more than a quarter of their portfolio companies are at risk in that same time frame.

Most entrepreneurs fear the worst when it comes to raising capital for the rest of 2020, and this survey does bear that sentiment out, at least somewhat. All but one of the VCs we surveyed believes it will be more difficult to raise capital in the coming year. And while 52% said it will be significantly more difficult to raise capital, 46% said it will only be slightly more difficult. Given the data around portfolios at cash flow risk, it could be inferred that any scaling back in new investments will be the result of funds being reallocated to reinforce those at-risk portfolio companies over the coming months. 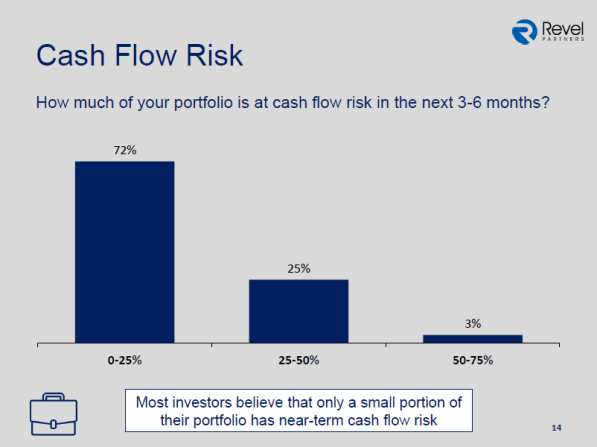 Taken as a whole, this data paints a surprisingly upbeat picture for entrepreneurs given the times we’re living though. The NYC venture community, though on cautious alert, still appears to be open for business. However, all founders should expect a COVID-driven haircut when it comes to valuations, which is understandable given what we have seen in the public markets thus far and the corresponding elevated risk profile investors are taking on now.

Entrepreneurs need to be thinking of ways to extend their runways as investment activity will definitely slow in the near term but, fortunately, that activity won’t disappear altogether.

(You can find the full slideshow of our survey results here.)

Varun Sridhar is an investor at Revel Partners.

No one is ready for California’s new consumer privacy law

TED-Ed Has Released Episode 9 of Think Like a Coder

How to Build a Healthier Ecosystem with IoT?