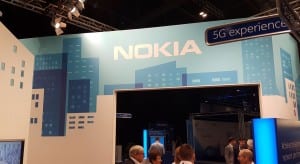 Nokia share price has jumped more than 10% following rumours the equipment vendor could be the target of a hostile takeover.

The rumours themselves can be traced back to TMT Finance, though such reports should always be taken with a pinch of salt. Nokia has allegedly recruited investment banking firm Citi to counter a transaction, but it refusing to comment on market rumours.

Although the report does not specify a source, making it more suspicious, the market has reacted in such a manner to indicate investors at least partially believe the rumours. Considering the losses racked up in the financial markets over the last few months, it would not be surprising if there were a few opportunists hiding in the darker corners devising such plans.

Thanks to the coronavirus outbreak, the global financial markets are not in the healthiest of positions. The Dow Jones is still down 19.5% from mid-February, with the NASDAQ down 13%, while the FTSE 100 has slipped 21.7% and the Euronext 100 has dropped 24.1%. For the majority, this is bad news, but those who are currently cash rich it presents a significant opportunity.

Certain companies will have drawn the attention of certain corners of the finance industry, and it is likely some of these are sniffing around. Vulture fund Elliott Management, for example, ramped up its ownership of Twitter in the months leading up to the coronavirus outbreak, pointing towards an under-performing share price. Such moves were made before the significant drops tied to COVID-19.

Looking at the table above, there are several prominent companies which might be targeted for hostile takeover, or at least attract the attention of activist investors.

Nokia is a company which may well be in the sights of numerous companies due to recent performance. This is a critically important company for the health of the telecommunications industry, so it is highly likely to have a sustained role, but it has not been able to keep pace with the likes of Ericsson and Huawei. Trends have depressed share price, making it a potentially attractive target.

If there is any truth to the rumours concerning Nokia, this would be a transaction being closely monitored by the relevant authorities.

Depending on who would be the purchaser of the network infrastructure vendor, there could well be a few regulatory authorities ready to veto. The US, for instance, should be very interested considering the role Nokia plays in the deployment of communications infrastructure in the country.

Having secured 5G commercial contracts with all four of the major telcos in the US, Nokia is set to play a very prominent role in the deployment of next-generation infrastructure, even more so when you take into account the firm is also one of the more successful vendors in the optical segment also. Having already ruled out any Chinese vendors, the options for US telcos are very limited, with Nokia being one.

Should the rumours be traced back to any companies or territories associated with China, it would be halted before any momentum is allowed to gather.