Home Technology Hackers target oil producers as they struggle with a record glut of... 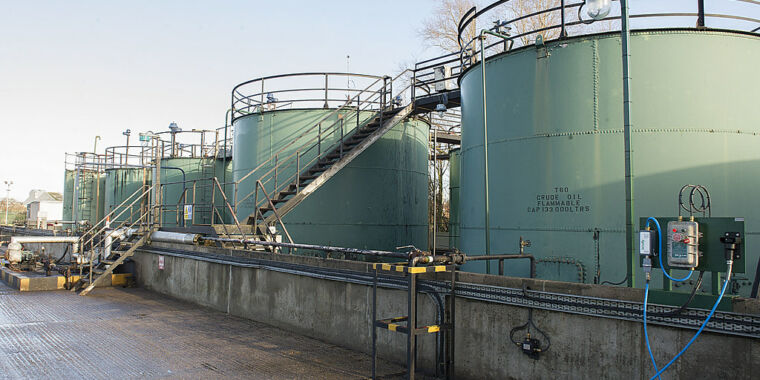 As the world’s top oil producers prepared for a weeklong meeting earlier this month to plan a response to slumping prices of crude, espionage hackers commenced a sophisticated spearphishing campaign that was concentrated on US-based energy companies. The goal: install a notorious trojan that siphoned their most sensitive communications and data.

Setting the campaign apart, the emails were mostly free of the typos, broken grammar, and other sloppiness that are typical phishes. The emails also reflected a sender who was well-acquainted with the business of energy production. A barrage of emails that started on March 31, for instance, purported to come from Engineering for Petroleum and Process Industries, a real Egyptian state oil company.

Not your father’s spear-phishing

The sender invited the recipient to submit a bid for equipment and materials as part of a real ongoing project, known as the Rosetta Sharing Facilities Project, on behalf of Burullus, a gas joint venture that’s half-owned by another Egyptian state oil company. The email, which was sent to about 150 oil and gas companies over a week starting on March 31, attached two files that masqueraded as bidding conditions, forms, and a request for proposal. The relatively small number of emails demonstrates a narrow targeting of the carefully crafted campaign. By contrast, many phishing campaigns non-discriminately send tens of thousands of emails.

“To someone in the oil & gas industry, who has knowledge about these projects, the email and the information within might seem sufficiently convincing to open the attachments,” researchers from security firm Bitdefender wrote in a post published on Tuesday.

The most-targeted companies were located in Malaysia, the United States, Iran, South Africa, and Oman.

A second campaign started on April 12. It sent an email asking recipients to complete a document known as an Estimated Port Disbursement Account needed for the chemical and oil tanker named MT Sinar Maluku. Not only was that a real vessel registered under the Indonesian flag, it had left its port on April 12 and was expected to reach its destination two days later. The email was sent to 18 companies, 15 of which were shipment companies in the Philippines.

“This email serves as another example of the length to which attackers will go to get their facts straight, make the email seem legitimate, and specifically target a vertical.

The campaigns are likely an attempt to gain closely guarded information about the current negotiations between Russia, Saudi Arabia, and other oil producers struggling with a glut of crude resulting from the coronavirus pandemic. Bitdefender said this is hardly the first time companies in this industry have been targeted. The security firm has been tracking a run of cyber attacks on energy companies over the past year. Since September, the number has increased every month and reached a peak in February with more than 5,000. There have been more than 13,000 attacks this year.

Both of the recent campaigns deliver files that install Agent Tesla, a malware-as-a-service offering that charges various prices based on different licensing models. The trojan, which has been available since 2014, has a variety of capabilities that include involving “stealth, persistence and security evasion techniques that ultimately enable it to extract credentials, copy clipboard data, perform screen captures, form-grabbing, and keylogging functionality, and even collect credentials for a variety of installed applications.”

Companies in the US were targeted the most, followed by the UK, Ukraine, and Latvia.

“What’s interesting is that, until now, it has not been associated with campaigns targeting the oil & gas vertical,” Bitdefender researchers added.

The campaign provides a reminder that, despite the growing awareness of phishing attacks, they remain one of the most effective ways for attackers to gain a foothold in targeted companies. Even when phishing emails contain misspellings, grammatical mistakes, and other flaws, recipients often rightly assume those are the results of senders writing in a second language. Phishes as well crafted as these ones stand an even better likelihood of success.

Operation In(ter)ception: Aerospace and military companies in the crosshairs of cyberspies