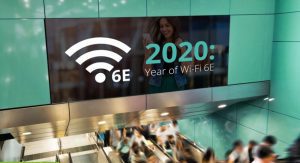 The US telecoms regulator didn’t split along partisan lines for once and is giving the country a lot more bandwidth to use for wifi and that sort of thing.

The FCC commissioners have had three weeks to argue the toss over the relative merits of freeing up the whole 6 GHz band (5.925–7.125 GHz) for unlicensed use, rather than licensing some of it to mobile operators. We expected them to vote in favour of it, but only by a 3-2 majority as the commissioners affiliated to the Democrat Party performed their standard Pavlovian objection. We were pleasantly surprised to be proven wrong this time, however, with all five giving it the green light.

“By doing this, we are effectively increasing the amount of mid-band spectrum available for wifi by almost a factor of five,” said FCC Chairman Ajit Pai. “This will be a huge benefit to consumers and innovators across the nation. Wi-Fi NOW’s Claus Hetting, a champion of wifi innovation, said it perfectly: ‘The truth is that this 6 GHz spectrum boost will launch the wifi industry into a new growth trajectory. It will boost wifi’s massive indoor dominance and surely, with the help of emboldened entrepreneurs everywhere, it will bring low-cost wifi (and unlicensed) connectivity to places where it has never been.’”

“While some argue that the unlicensed community doesn’t need the full 1200 megahertz of spectrum, I strongly disagree,” said Commissioner Michael O’Rielly. “Instead of doling out unlicensed spectrum in slivers or piecemeal through some dividend mechanism, we have the chance to provide a huge, much needed infusion of wireless currency to American innovators and entrepreneurs, who will undoubtedly amaze us with their ingenuity. Moreover, to obtain unlicensed 5G-like capabilities, 160 megahertz channels, or eventually 320 megahertz under Wi-Fi 7, are absolutely necessary. “

“I suspect this order will not be remembered because it enabled faster Netflix downloads,” said Commissioner Brendan Carr. “We don’t know what the future holds, but maybe the present pandemic gives us some clues about what’s around the corner. Millions of kids, including mine, are out of school today and stuck at home. Teachers and parents are working hard to keep them learning. Some are turning to video calls to enhance in-home learning, but even that does not capture the feedback between student and teacher that exists in the classroom.”

“With this decision on unlicensed spectrum we do well by the law, we add more permissionless airwaves to the wireless economy, and we expand the democratizing force of having more wifi in more places,” said Commissioner Jessica Rosenworcel. “Amen. Those are good things to do in this crisis and for the days ahead.”

“The 6 GHz spectrum is expected to complement 5G wireless service and unleash a wave of innovation for the Internet of Things,” said Commissioner Geoffrey Starks. “It will allow doctors to conduct complex examinations and procedures remotely, enable the training of students and workers using virtual and augmented reality, and spur the next generation of streaming content and gaming.”

All the Commissioners made reference to the importance of wifi in keeping everyone connected while they’re locked down, which probably contributed to this rare unanimity. It’s fair to say wifi is having a good pandemic and the  wifi industry is specially pleased about what this means for realizing the full potential of Wi-Fi 6. We already heard from Wi-Fi NOW via Pai, so here’s what Tiago Rodrigues, CEO of the Wireless Broadband Alliance, had to say.

“Extending wifi into the 6 GHz spectrum band can provide more wifi capacity than all the other bands put together,” said Rodrigues. “What’s more, using Wi-Fi 6 technology in the extended band (also known as Wi-Fi 6E) will deliver higher speeds, low latency and service levels that are equivalent to 5G networks and be able to support the widespread, low-cost, use of advanced business, industrial and consumer applications. In terms of the capability and capacity of networks, Wi-Fi 6E, will rewrite the rules of what is possible.

“Wi-Fi 6E technology is designed to deliver performance in highly congested places and the next phase of our trials will prove that performance in real world locations. These trials will demonstrate the application and the benefits of the technology in live environments and through this accelerate the adoption and creation of new business opportunities enabled by the opening of the 6GHz spectrum to be used for wifi services.”

Various other wifi stakeholders, including Google and Intel, also applauded the move, so any US operators that feel hardly done by would be well advised to keep their opinions to themselves. Conspiracy theorists, however, are unlikely to do so and it’s surely just a matter of time before the tinfoil hat brigade start foaming about how wifi over 6 GHz gives you coronavirus, or is used for mind control, or some such attention-seeking guff.

How to Create a Bibliography in Word