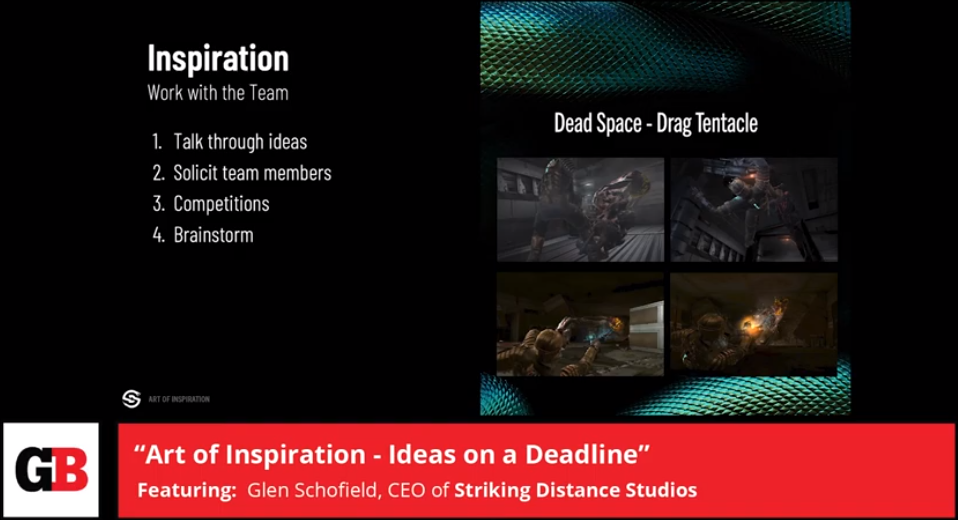 At one point during Issac Clark’s adventure on the USG Ishimura, a giant tentacle grabs him. As the player, you launch a desperate assault at the appendage as it slowly drags you down the hallway. It’s a tense segment, especially when you consider that Dead Space is a game from 2008.

“One of the things we had with the team on Dead Space was to host a horror competition,” said Striking Distance Studios CEO Glen Schofield. “Everyone could submit ideas for horror and once a week or so we’d go through them.”

Schofield’s anecdote about Dead Space is part of a larger talk about how creators find inspiration during day one of GamesBeat Summit 2020. He talked about how he found several ideas for his work on Call of Duty: Advanced Warfare and Dead Space. He showed a clip of the tentacle scene in Dead Space, that he recalled a fan-favorite idea from the competition during the talk.

“Games are a combination of millions of creative decisions and thousands of ideas,” he said. “Teams need to come up with these all the time — and on a deadline.”

Schofield said that he is almost always in brainstorm mode, looking for ideas by reading scholarly articles and news pieces, interviewing other creatives both in and out of the game industry, and running competitions among his teams of developers. These tactics are still possible while game designers are at home on lockdown during the pandemic.

He also mentioned other specific anecdotes, like how a road trip through Europe to visit several World War 2 sites helped shape Call of Duty: WWII and how a trip to the NASA Jet Propulsion Laboratory in Southern California to see its “walking tank” led to the design of a futuristic tank in Call of Duty: Advanced Warfare. He encouraged travelling in order to seek inspiration although that may not be possible for the foreseeable future.

Schofield also touched on the topic of brainstorming sessions and that studios should prepare for them by coming up with ideas beforehand and encourage everyone to bring something to the table. “Great ideas can come from anywhere, anything, or anyone,” he said. “You just want to make sure they get into your game.”

Striking Distance Studios is a new independent, wholly owned subsidiary of PUBG, that started operations in a new office in Northern California in February. Schofield, who cofounded Sledgehammer Games, is the head of the studio recently acquired by the battle royale giant. The company hopes to move “beyond battle royale” with its projects.

Smart tech gifts: How to keep your kids and family safe

Meet the Computer Scientist Who Helped Push for …