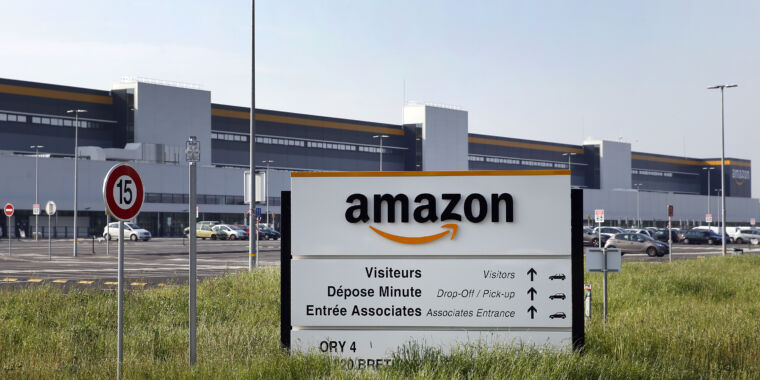 Amazon has shut down all six of its distribution centers in France for the time being following a ruling by a French court that it was not taking sufficient measures to protect its warehouse workers from COVID-19.

The court ruled Tuesday that Amazon must stop selling “non-essential” items in France by Wednesday or face a fine of €1 million (about $1.1 million) per day until it comes up with a stronger plan to protect the health of its employees.

While the ruling allows the company to keep sending items such as food, medicine, and “hygiene products,” company executives said the mandate was too broad to interpret. “Is a baby bottle a hygiene product? Yes, I think so,” Amazon executive Frédéric Duval told The Wall Street Journal. “But is this what the judge thinks is a hygiene product? I don’t know.”

The suit was filed by a group of French worker unions who alleged conditions inside Amazon’s warehouses were insufficiently safe for dealing with COVID-19. Amazon filed an immediate appeal to the ruling, saying at the time, “We disagree with today’s decision by the Nanterre court and are currently assessing its implications for our French logistics sites. We will also continue to work with all stakeholders and provide the necessary clarifications as we have done since the beginning of this unprecedented crisis.”

In an internal memo to French unions, obtained by Reuters, the company said its facilities would be closed through at least April 20 in order to “assess the inherent risks in the COVID-19 epidemic and take the necessary measures to ensure the safety of its employees.”

Demand for both essential and frivolous goods has soared for Amazon worldwide in recent weeks as shoppers are not only trying to avoid going out in public to local stores, but also many of those brick-and-mortar shops have shuttered—some temporarily, some permanently—in response to the novel coronavirus threat.

Amazon’s systems and workers have been overwhelmed with the rush. The company has rapidly moved to hire 175,000 new warehouse and delivery employees, even while warning of delays, de-prioritizing shipments of non-essential goods, and limiting grocery delivery services to existing customers.

A new report from The Wall Street Journal finds that in a bid to get consumers to lighten the load, Amazon is now reversing course on decades of design and trying to nudge consumers to buy less than they otherwise might.

One employee told the WSJ, “We typically want to sell as much as we can, but our entire network is so full right now with just hand sanitizers and toilet paper that we don’t have the capacity to serve other demand.”

In addition to scrapping upcoming promotions for Mother’s Day and Father’s Day it would ordinarily run, the WSJ reports, Amazon has also removed recommendation widgets, scaled back coupon promotions, and made other subtle changes designed to make visitors not fill their baskets with physical goods they otherwise might impulse buy. (Indeed, when I visited Amazon’s website earlier, all of the suggested modules on the page where I usually see items I have bought in the past now either relate directly to the company’s COVID-19 response or are promoting digital goods and services only, including Amazon Prime video and Kindle e-books.)

Sources inside the company told the WSJ that they do not expect many of the changes to be permanent but that Amazon may need more than two months from now before it can return to its pre-pandemic ways.

The who,what and why of SIEM!