Home Business Ericsson tries to put a brave face on the MWC catastrophe –... 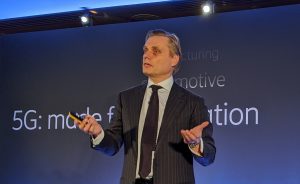 Networking vendor Ericsson decided to press ahead with its pre-MWC briefing but couldn’t avoid addressing the elephant in the room.

Head of marketing Stella Medlicott wasted no time in reflecting on the cancellation of the show and on Ericsson’s pre-emptive decision to bail out last week. Apparently the Ericsson stand had over 10,000 visitors last year and they reckoned the risk, although low, of all those people passing Coronavirus between them was too great. We were told the decision shocked a lot of people within the company, but it had to be done.

We then heard from head of networks Fredrik Jejdling (pictured), who offered an update on the state of play with 5G. Unsurprisingly he announced that 2020 is all about scaling up for 5G, with subscriptions expected to jump from 13 million to 100 million, much of which will be driven by China. Ericsson itself now has 81 5G commercial agreements with 49 customers and 25 live 5G networks worldwide.

Why these 87 million people will decide 5G is such a great idea, however, remains unclear. On the consumer side Jejdling referred to good old gaming and VR/AR, but there’s still little sign of the eagerly-awaited surge in demand for that stuff. The B2B case for 5G right now is stronger, with smart factories, private networks and that sort of thing achieving some traction, or so we were told.

There was a brief part of the presentation devoted to ‘beyond 5G’, but sadly the number 6 failed to make an appearance. In the Q&A Ericsson was asked why it’s 18 months behind Huawei on 5G and responded that it’s not. Jejdling was then asked if Ericsson was only a member of the ORAN alliance in order to undermine it. He responded in the negative, while at the same time stressing that ORAN isn’t much use right now.

Other than that there was the usual flurry of press releases, originally intended to beat the MWC rush, but now in danger of getting in each others’ way. The fun one was Ericsson’s claim to have broken the 5G speed record by clocking up 4.3Gbps over 800MHz of millimetre wave spectrum, which is nice. Other than that there were some new bits of Ericson’s 5G core, an AI boost to its network services offering and an Austrian IoT deal win.

Through no fault of Ericsson’s (although it could be argued they were the first major domino to fall) the cancellation of MWC made its preview event feel a bit flat. Nothing has actually changed of course, deals will still get done and stories written, but it was hard to get excited about networky stuff when the industry networking event of the year had just been taken from us.

Compliance @ the Speed of Thought

Disney+ accounts hacked – How to protect yourself